Good news at the Docs, new shoes and a new PB

I've had a new post in mind every week for about the last four week, there's been that much going on, but finally gotten to it, amongst all the other stuff that's been keeping be busy.

The wine is still going strong, the 5 gallons of apple are subsiding now after their furious initial ferment; and just this week, I've started off some elderberry, which makes a lovely deep red wine, much like a merlot as long as you keep the light out, otherwise the colour fades.  The good thing with it though is that after you've strained the fermenting must off the berries, you can use them again and make a rose wine as well, so two for the price of one.  I think that's probably it for now as I have limited space and limited glassware to keep it all in.

Otherwise, I've had my first visit to the consultant since my diagnosis in June, and overall it was bloody good. My HbA1c, a measure of overall blood sugar control has gone down from 129 to 46mmol/l, or 6.4%.  Effectively, this means that my risk of long term complications at that level is no higher than the average non-diabetic, so bloody good going.  BP, liver function, kidney function all good as well, RHR still in the mid 40's and you won't get much better than that outside of a professional athlete.

BP was slightly up, but that was mainly because I'd used the train and bike rather than car to get there.   I attribute this to three things
1) fitness, and a habit of exercising
2) a good clean diet, avoid the shitty refined carbs
3) discipline, I've got 30 years left if I'm lucky and only discipline will get me there healthy

Overall I've also been going well in the exercise front.  Two weeks ago I did my first long run since my failure at the Grim Reaper, I'd been holding off until now partly for psychological reasons as I didn't fancy the idea of my knee going tits up on me again. Half hour blood testing worked well again, with 30g carbs every half hour, BG was 5.7, 6.3, 6.7, so drifting up slightly, then with a post run bolus and reduced insulin, it went up as high as 9.9 before being back down to 5.7 at lunch.

Last week I went out on the Sunday run with the cycling club, with the principle that 45 minute tests were OK, but I would have to sprint ahead of the pack and test, then catch their back wheel as they went past me.  All worked well until we were heading towards Newmarket for a cafe stop, I sprinted ahead, tested, they didn't appear.  I turned round and chased as hard as I could, but didn't catch them.  I arrived at the cafe about two minutes after they had, so not a bad chase.  Overall 99km on the clock for the day's riding so pretty happy with that.  BG behaving as well at 7.0, 7.5, 7.9 then having taken soem carbs just before and had a date and oat slice at the cafe, up to 10.4 but then back down again to 7.5 by the next test after setting off again.  This time I avoided the post exercise low again, but at the cost of running high later in the day at just under 10 when I went to bed.

In both cases, I'd followed the same strategy of half basal dose and one unit bolus at breakfast before, and a reduced bolus at lunch afterwards.  My overall sensitivity still seems a little variable though, settling down near to 15g carbs per unit at dinner and lunch, but breakfast is not so easy.  Some days near 15, but this morning I applied that and promptly had myself a hypo.  Not ideal when I was planning on riding into town with my daughter for shopping.

Finally, on the exercise front, I've started training for a New Year's Eve 10k race, including some interval and tempo sessions, with some experimenting for BG management as well.  Last Tuesday I did a tempo session, 2km easy-6km at target race pace-2km easy.  I only went and had myself a new 10km PB, in training, by 25 secs. Cool.

So, shoes, or more specifically running shoes.  Can you have too many?  Is this too many? 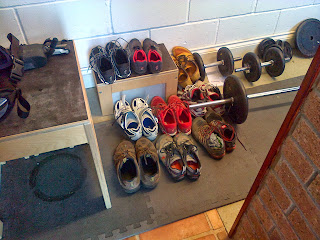 Anyway, even if it is, I've now got these as well FLite 195.  Very comfy around the house and will have a test tomorrow on the road.  Looking at them, they'll be good for roads in wet and dry, plus dry trails and grass. I'll report back later 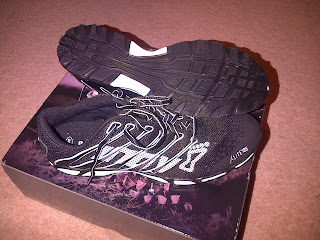 Posted by The Athletic Diabetic at 20:32