In keeping with my usual theme of three things, this week I’ve gone for the sad news that my cherished Altra Samsons are soon to be no more, they’ve finally got to the stage where any minute now my toes will be going through them and the tape is now stronger than the fabric.
On the plus side I have my lovely nre Inov-8 F-Lite 195s to rave about.  The other thing worth raving about is my new feel legs – one trip to GarySoftTissueTherapist Benson and they feel almost new again.

So let’s start with the Altra’s, I’ve had them for the best part of 18 months now and put a good number of miles on them in that time as they were my go-to road shoes for a long, long while.  In between I got myself a pair of my other favourite shoe maker’s products, the Inov-8 Bare X 180, which didn’t match up to them in that:

The Altras by contrast still show barely any wear on the soles despite well over 1000km on them, maybe approaching 1000 miles, but the uppers appear not so robust.  I have a suspicion that it’s the running on dry trails with grass stems and weeds abrading them that has done the damage as you can see.  I’ll continue to run with bits of strategically placed duck tape on them to keep them together.
But what about the new shoes I hear you clamour? 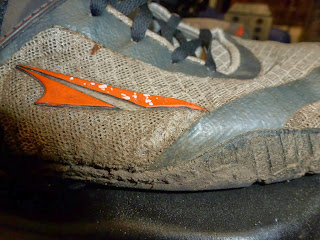 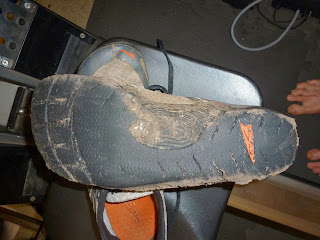 Well, you may recall, back in June this year before my pain in the neck diagnosis, I was waxing lyrical about the wonders of the X-Talon 180.  Now I’m running on the roads in its younger brother the F-Lite 195, almost the same weight, the same form but with a few differences.

To all intents and purposes, the feel of the shoe on the foot is almost identical mainly because they are built on the same last as far as the marketing goes.  The main reason I bought the F-Lites is 1) they were on offer and 2) they had a 3mm heel to toe drop 3) they weren’t a lurid colour. At the time I was having a lot of trouble with tight calves, possibly due to the diabetes, but also possibly due to the forefoot running (neither of those turned out true, but please read on to find the truth), and I thought they would take the pressure off the calves to an extent. 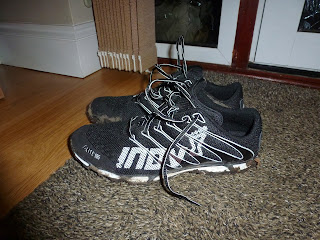 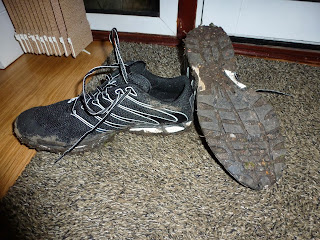 Well, needless to say I’m very impressed with them, they run almost the same as the X-Talons and have a medium ground feel I’d say – less than the Bare-X or the Altras, but more than your average moon boots.  They’ve also got the same characteristics of a great feel around the foot, feeling a snug as a slipper and as light as a feather. As with most ultra-light shoes, they make no pretence of being waterproof but what goes in easily, goes out just as easily.

What they do have though is phenomenal grip levels.  On wet roads, dry grass or trails and on wet hard-packed dirt/grit they have performed superbly so far.  My only trepidation is that the grip levels may be at the cost of a soft sole with poor wear characteristics, but on examination so far, no indication either way. So that’s the shoes, so far, maybe a couple of hundred km into them.

Otherwise, I’ve finally got myself to a sports therapist to get my legs dealt with.  Back in August my left knee imploded on me in the Grim Reaper, only to be as right as rain ever since, but the calves and hips have remained tight, my left ankle was shot and I was getting such pain in my left big toe that I thought I had either gout or arthritis. Turns out all my problems have been coming from my lower limbs and ankles and not my hips after all.
Diagnosis

That was about a week or ten days ago now and since then I’ve done yoga twice, cycled twice and run three times.  One of those runs was a pretty decent interval session using a bridge in Hull, 8 repeat 500s at sub-race pace.  But the only one that caused any trouble was a steady run that left my ankle in pain, but everything else feeling good.  Since then, the toe is much better as is the ankle, and the tightness in the calves is much less.  Something tells me I’ll need to keep this up for some time if I’m to have a decent 2014 ahead of me.

And the training? Still going.  Didn’t get a hard session in during the week, but did get two runs down the Thames path through Reading, nice and spooky in the dark.  Did the weeks hard session tonight instead.  1.5k warm up, then alternate 2km hard. 1km recovery for the rest of a 10.x k session, so overall 6km at whatever pace was dictated by a HR band in this case.
Ended up like this, and it hurt.

Posted by The Athletic Diabetic at 19:11