well that was bloody nasty. The traditional new year's eve 10k race starting and finishing in my village and doing a loop round the local fens. Only trouble is this time of year you're taking a real chance with the weather. If we'd run it two days earlier that would have been perfect; dry, cool no winds.
Instead we got 20-25mph wind down the back straight from about 5.5km to 9km, on a roughly triangular course.

I'm also going to get my excuses in early here.  Although the trainin had been going very well in the run up to the event, with the speed sessions showing good promise at paces quicker than the race plan, it all went to pot before Christmas.

I had a very busy run up to Christmas, ending up in Norway the week before, which in iteself was OK, but I could have doen with some time at home to catch up on things.  Anyway, toward the back of that week I went down with what turned ouot to be a vicious head cold, affecting both my sinuses and blood sugar control in a bad way.  Luckily the sick day rules from the DAFNE course worked, adn increasing my basal doses made a difference, but I was still running at  9-10 rather than 5-7mmol/l, which makes for additional lethargy and generally feeling crap in addition to the cold.

I also learned that sudafed is contra-indictaed for diabetics, it's an adrenaline mimic so puts blood sugars up even further - Doh!

As a result of all that lot, I had to miss my Christmas Eve and boxing day runs and curtail the last few runs leading up to the event.

And then came the plan; I had a nice progressive plan laid out which would have seen me accelerating nicely into the finish, bit it was clear that was never going to work in the circumstances.  I threw the plan out the window and decided to just make up as much time as possible with a favourable wind at the start.
At the end of the 6th km I was 14 secs ahead of target, at the end of the 7th I was even, I then lost 50s in km 8-9 into the wind, even with shelter from the runners in front, and by the time I got to the last km where I normally have a strong finish, the legs were dead and I could only claw back 7 more secs. 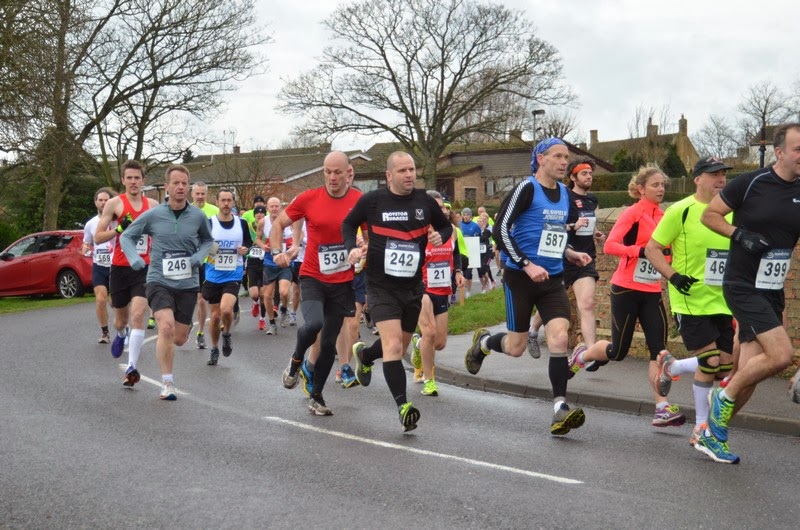 about 500m from the start 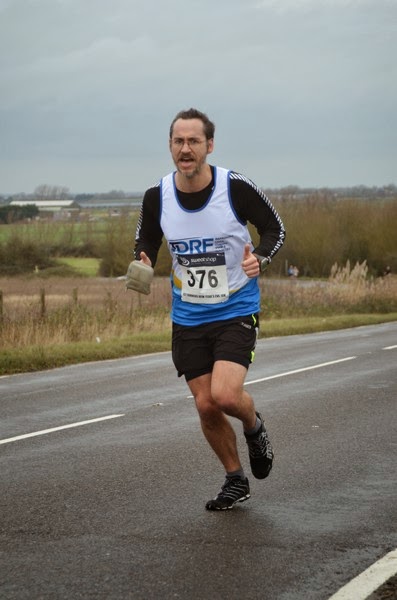 about 1500m from the finish
In terms of blood sugar control, morning of the race, I dosed up with sudafed again as well as the natural adrenaline, and walked over to the village hall with a blood sugar of 11.9, dropping to 9.1 after the warm up, adn 7.0 after the race. A quick gel to stave off the post race dip and it was quickly back up high again at 10.6.  After a very good lunch, dosed appropriately, it had fallen back down to 4.3.  Without that gel, a hypo would definitely have been on the cards.   The post exercise response is still something that's taking a bit of geting used to.

And finally, my fundraising page is up adn running, here http://uk.virginmoneygiving.com/athletic_diabetic please take a loot and donate as much as you can comfortably afford.  We all know there are loads of good causes out there, and this is another good one.

Since then I've taken my usual hiatus from running, but where it lasted a month last year, this year it was only about ten days.  Between now and March the plan is to go back to steady base building miles with most sessions capped at HR of 148.  March starts the long runs again building up to the Yomp in June and April will see the speed endurance sessions start to come back.  Even for endurance runs, you can't ignore the speed work, it makes a big difference to still be able to work hard on tired legs.

Posted by The Athletic Diabetic at 07:45