I’ll say it from the start, this is not quite going to be my usual blog for two reasons; i) it’s a race report into my recent foray back up north for a fell race, and ii) it’s also forming the basis for another article I’ve been asked to write.  The background is that some time ago, I saw in a newsletter that the Natural Running Centre was looking for contributors to a publication based around “a day in the life of a runner”, so I asked if they were interested in my story and the management of T1D as a runner.  Guess what – they were, so hopefully I’m going to be published.  This is therefore my day in the life, the chosen day being my bid to get a PB at the hardest race I’ve run in my life (so far), this time as a diabetic.


Starting with the basics, for those that don’t know, almost one year to the day I was diagnosed with Type 1 diabetes, aged 39 and having just completed a 23 mile fell race in 4 hrs 25 minutes.  I was somewhat shocked, but the symptoms were all there

Whether I liked it or not, I was now diabetic and had to get used to injecting myself 5 times a day, 2 slow release background insulin (basal) to deal with the glucose released from the liver during the day, and quick acting to cover the carbs in every meal (bolus).  My pancreas was now in the form of a syringe.


The next adaptation I needed to get my head around was running, or any other form of exercise and how my body was now going to react.  Firstly we need to understand exactly what insulin does in the body
1) it’s a fat storage hormone – eat more carbs than your body needs immediately, then insulin helps lay it down as fat for a future energy store
2) transport function – moving blood glucose into the muscles for use when needed, but also knowing that as you exercise you become significantly more insulin sensitive
3) glucagon suppression – normally, when you exercise, as you blood sugar drops in response to the transport into the muscles,  glucagon releases stored sugars from the liver. Insulin supresses this, so a double whammy.  For short sharp exercise, adrenaline may kick in and do the same, but in an endurance athlete that’s not happening.


So, all that in mind, and a year of experimenting I have a strategy for managing insulin and carbs around training
-          Yoga and weights, no change – aerobic exercise does nothing to my BG levels
-          Short sharp exercise, sprints, intervals – no change to doses, but watch the BG level as it can rise or fall
-          Steady stuff, in the aerobic zone – at least 3 hours from my last bolus dose, monitor glucose every 5km, eat additional carbs to compensate for the drop
-          Long sessions – reduced basal dose, on experimentation I need to reduce by about 60%, massively reduced bolus at the previous meal, typically breakfast.  Down to 0.5 unit from typically 2-3 for a bowl of porridge.  This one is a balance between the risk of high blood sugars before I set out and the massive drop I get in the first 5km.  Prepare to eat, test every 5km and carry 40-60g carbs per hour, plus a reserve just in case.


Sunday 1st June 2014 had me running through all of this as I was preparing to run The Yomp Mountain Challenge on the anniversary of my diagnosis.  It’s a 23 mile/37km race in the fells of Cumbria, approx. 1200m (3900ft) of climbing in there as well.  And fell races are not trail races, for those that don’t know them.  They are not just off road, they are off everything, no roads, no trails just open mountainside/fellside.  In this case though, the organisers are a bit kinder to us and mark the course with a flag every 100yds or so.


Toe the line, start the timing chip and off I go, first 5km largely on hard surfaces, not much climb so pretty fast, almost all running, so I’m expecting a big drop here.  Test at 7.9 vs target range 6-8, so just 20g carbs as a fruit/nut bar. 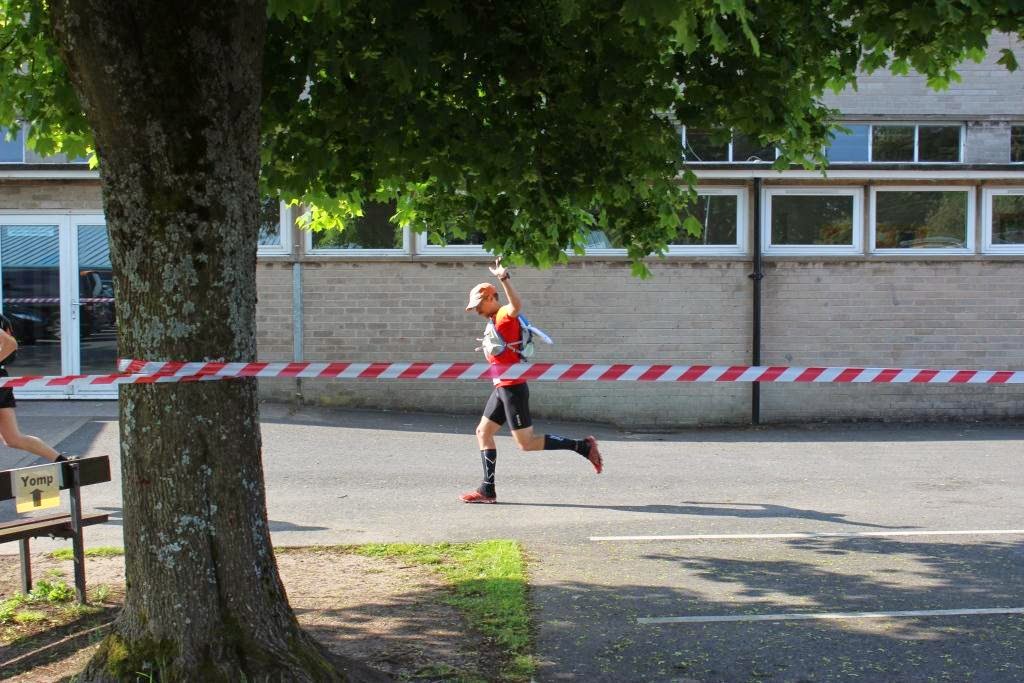 Quick run in to the first water station, slurp and off again into the first big climb of the day to Wild Boar Fell, down to a steady walk here starting to pass other runners and the early walkers.  This is where it starts to get tough for someone who lives and trains in the flattest bit of the country but races in the hilliest, with the calves and hips already protesting.  The next test at 10km, BG steady at 8.1 but I know there’s only about another km of climb, then it speeds back up again, so a quick acting 30g of carbs from a gel. 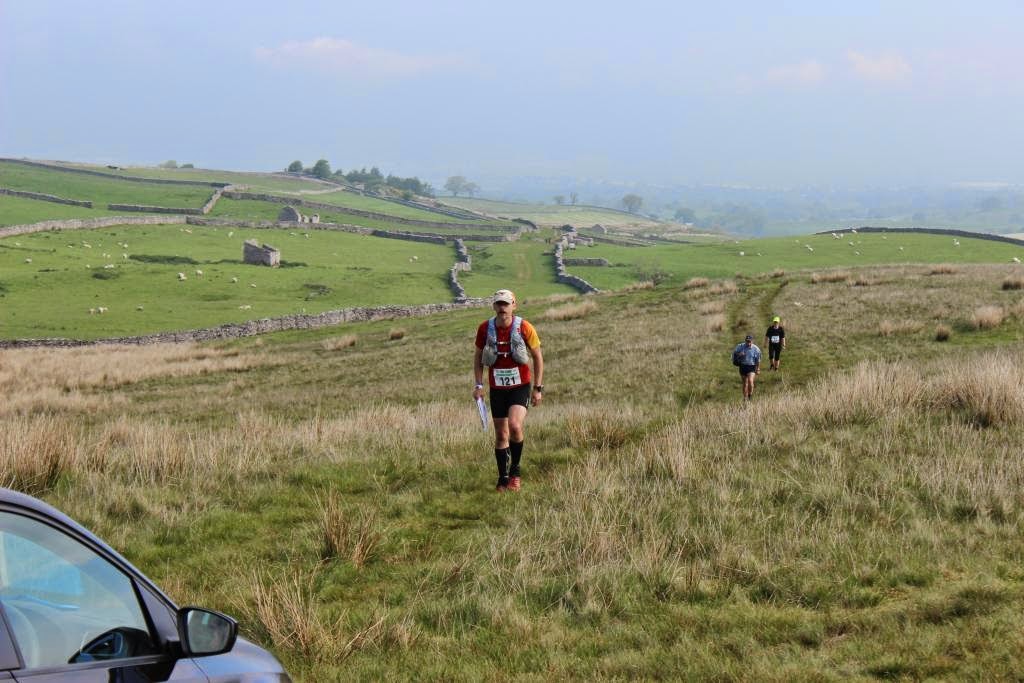 Coming into the first checkpoint, 6km
﻿
Over the top and into the clouds as it flattens into a plateau, a quick steep dip into a bowl and back up before the first big drop off. This is where the real time can be made up, let the legs go down the hill and try and keep the feet moving quick enough, except I almost got it wrong and let my body get ahead of my feet.  That’s where I hit my simultaneous fastest pace of the race and also my highest HR at 191, not too shabby for a 40 year old.  A bit of creativity needed here to get the 15km test and eating in before the first big really big drop off, losing 300m of the 600 gained in just 2km, can’t risk losing concentration while eating.  BG of 8.9, a bit high, back it off to a 15g carb hit, eaten in 3 bites while running. Turn left, dive down off the fell into the blazing sunshine again.  At the next timing point 2km later, I’m 3 minutes up on this point last year. 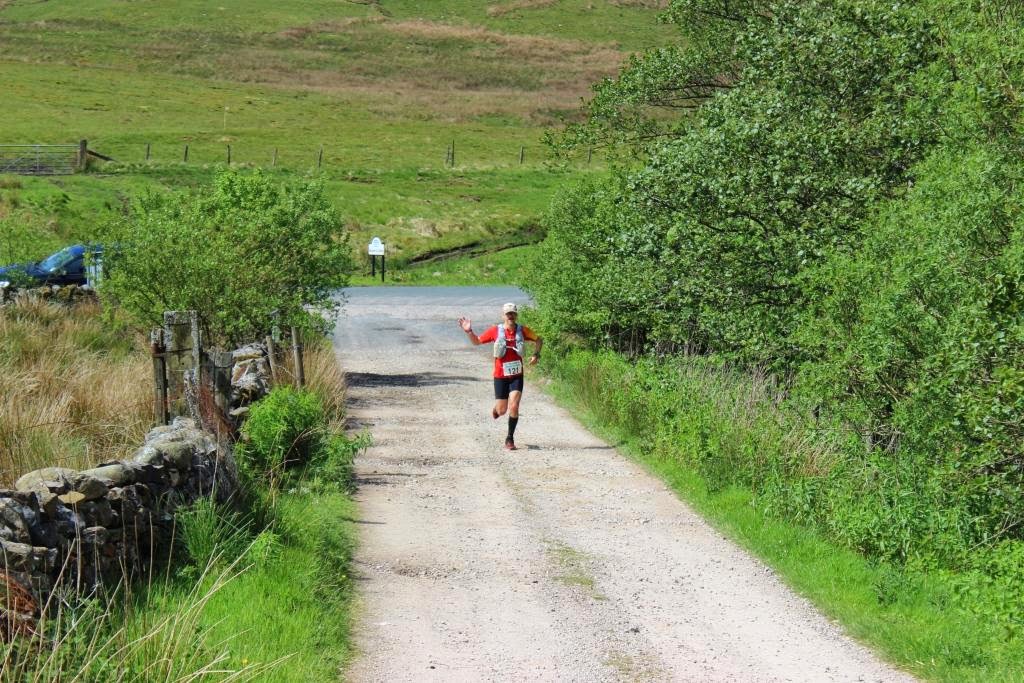 Arriving into Aisgill, 17km in with still fresh legs, 3min ahead
﻿
The next section is the real killer climb, not as high or as long as the first, but 17km in a 5km climb staring you in the face tends to take it out of the legs and mind alike.  In my case I misinterpreted my hands swelling in the heat as a sign of overhydration and stopped drinking for about 8km/5 miles on a pretty warm day by now. 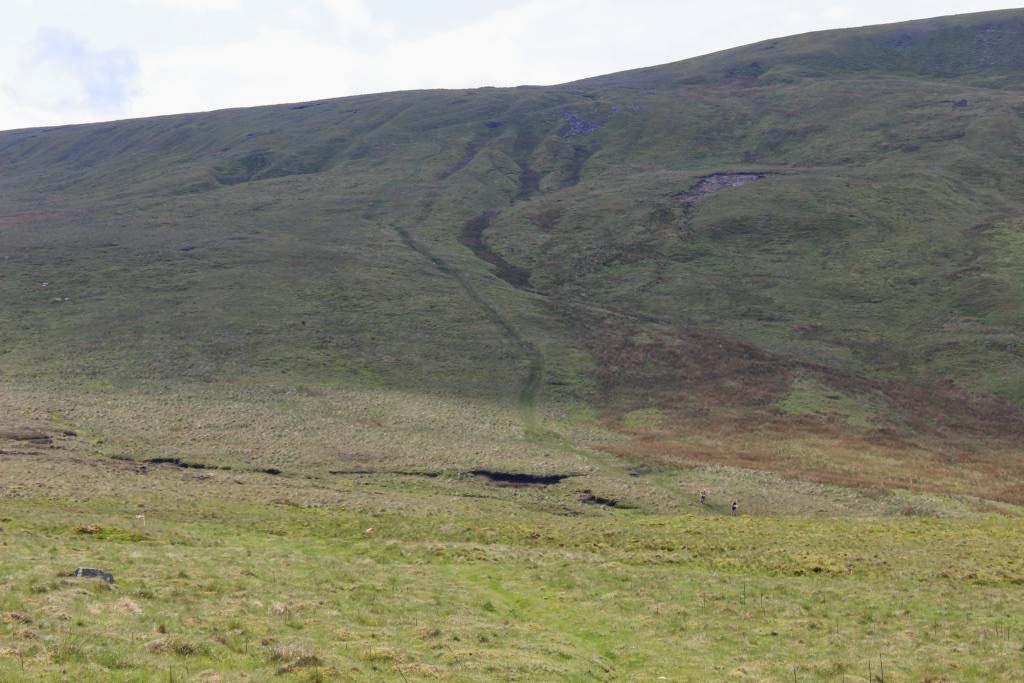 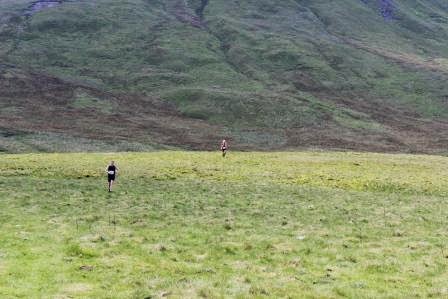 Not much of a path really, coming down from Mallerstang, the third of four hills
20km, BG at 8.1, 20g gel with added caffeine, keep climbing.  Over the top at about 22.5km, and back up to a steady run before the next test at 25km, just before the drop into a valley and then the final climb.  25km and tested at 4.9, way too low and getting towards hypo territory, maybe it was that long climb extending the time between tests, maybe that was just a tougher section, back to the 30g gels. Drop down and then a short flat section before the final short, sharp (only 160m) climb to the final peak.   Taking the water in again and the brain function is coming back a bit, so I was with it enough to test on the peak, just ahead of the 30km point and the last 7km downhill stretch.


7.9 perfect, launch myself downhill, still with my 3 minute lead on last year and finally thinking I’m going to make my PB target, and maybe my stretch target of sub 4hr 20. Hang on a minute, I tested, but did I eat?  No, so first time I’ve ever tried to take a gel while running downhill on rocky ground.


Now to concentrate, 38 minutes to do 7km, mostly downhill, and with at least 3km of that on the road again, that’s not even a 5min/km pace.   Steady but not letting up as I knew there were a couple of walking sections still to come and likely congestion with slower walkers on the same course.  One more test at 35km, 6.9, another small gel, and the signs of cramp starting to set into the calves with the downhill pounding. 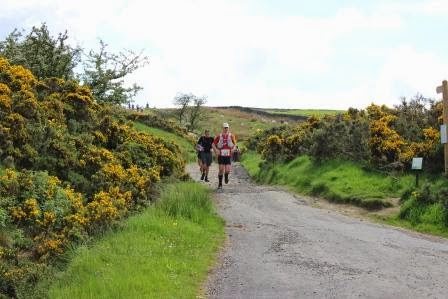 About 4km from the finish, having passed several runners downhill, about 25 minutes to spare to beat last year's time

Over the line in 4hr 19 minutes and 18 secs.  A PB by 6 minutes over last year, 3 minutes gained on the first 10km climb, and 3 more on the last 7km descent.  If you take an average of 30 secs per blood test, that should have given me another 3 minutes.  Positioned at 25th overall, 20th male, very happy with that indeed.


The other part of T1 diabetes is managing the recovery.  Remember that insulin sensitivity, well it’s still there and it’s trying to both replenish muscle glycine stocks and also replenish the liver, and the only place it’s getting any glucose from is my blood.  That means that in the next two hours, and possibly longer I’m now at risk of a massive hypo.  Only one solution; eat starting immediately, 40g of carbs from a sports drink and another 30g from slower release sources, no insulin yet I’m expecting a quick spike in blood glucose and then a sharp fall again later.  Lunch after a quick shower, again the insulin dose being reduced to prevent too rapid a drop.   This time it went from 12.8 after the quick carbs, back to 5.7 within 2 hours of one unit of insulin and 70g carbs.


Overall that was around 160g carbs on the run and 140 afterwards, 300g total, about 2-3 times my normal daily intake, but a good marker for the next hard race.


Sitting here now, three days later tidying this up, I’m working though my body bit by bit.  My quads are still wrecked from all the downhill, and although walking is painful, I’ve managed two short runs of 3 and 5 miles with decent pace/HR.  My neck and shoulders were also feeling it yesterday, oddly which must be a reflection of the upper body usage in the climbs.  Oddly though, calves, ankles and hips are all feeling good which is where I was expecting most trouble.


Posted by The Athletic Diabetic at 15:15