Well, today was the day, HM time, the culmination of the last ten weeks worth of following a plan (and deviating from it when I felt like it, after all a plan is just a suggestion).  Target, based on 10km PB was 7:40 minute miles or a 1:40:34 finishing time.
Well, the day dawned at 6 am with the alarm clock, out of bed at quarter past.  Normal, simple breakfast of home made muesli and coffee (never change anything on race day) then check, and re-check my bag ready for the off.
Three full bottles of water, one for in the car, one possibly as a hand held if hot enough and one for afterwards.  Plus snacks/energy bars, a banana to eat on arrival, a couple of gels for the shorts pocket, and tape for the big toe blood blister.
I hadn’t told Tim (my fellow HM virgin who I’d conned into running with me) that I’d gone out for a training run last week and ended up with a blood blister the size of a grape on my left big toe.  I’d hoped it would resolve itself for this week but resorted to home surgery with a sharp craft knife and surgical spirit to manage infection.  No issues, and plenty of tape for it today. 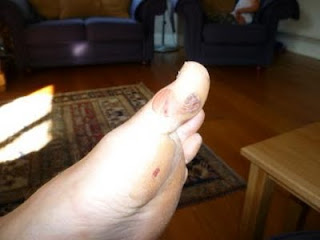 The morning was nice and cool at about 16C with a decent traffic free drive to get there arriving within minutes of Tim, nice to finally meet him and his fiancée.  Led Zep and Slowhand in the car to get me in the mood. The usual bumbling about waiting for the race to start, last minute trips to the toilet, toe taping, banana eating etc.  Then we got chatting to the lady next to us in the car park who was in two minds whether to do the HM or not.  She explained that she’d done the 70mile ultra on Friday/Saturday resulting in huge blisters (photos shown), but she’d popped them, taped them and was going to go ahead and do it as there was an extra trophy for doing both in the same weekend.  Now that’s commitment to running!
This is the drive up to the house, which I was to find out later was also the run in to the finish, you can see the signs on the right. 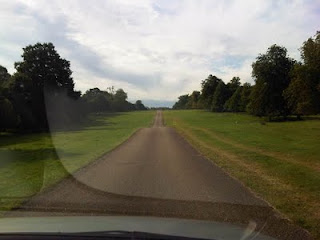 Now I’ve always found that I do best in races with a negative split strategy so the plan was
First 4 miles at 8:00
Next 4 miles at 7:50
Next 2 miles at 7:40
Last three miles at whatever I can, but definite push hard.
Right, time for business, five to ten, still a nice overcast 16C (60F), wish Tim well for his target 2hrs. Starter’s instructions, air horn and we’re off.  Start my watch at the start line and try not to do my usual fly off from the start and suffer later.  However I still looked down at my watch and saw 7:35pace.  Time to back off a bit or I’ll crash and burn.  First 3-mile loop around the lake, down the hill on tarmac, turning to trail and grass before coming back round in front of the house again.  All to plan so far.  First water station at 3-miles, ignore that one and carry on back down the slope again.  At this point I started chatting to another bloke I’d been trailing so far, who told me that it was probably not a good HM to start with as it was very hilly.  I’m not sure where he got that from as total gain according to my Garmin at the end was only 163m.  Anyway, I accelerated slightly at mile 4 up a slight slope and blew him away, never to see him again.  That then set the pattern for the next 6 miles as I slowly started to reel in those hares that had set off way to fast.
Second water station at about 5.5 miles, stuff a gel down my neck on the run in, stop and drink 2 cups of water then off again, passing the next rabbit in the process.  This was the only steep hill on the whole race as we turned off onto a forest trail.  Pick off another couple of rabbits on the way, and then this was the only stretch of the race where I needed to walk for about 200m as the path was just too steep.  Then onto a nice long grassy drag for about a mile or so and back onto a hard trail of packed earth and crushed limestone rock.
Next water station at just before 8 miles same drill, stop, drink two cups water, carry on. About 20-30 secs lost. For the next three miles it was a long drag back down a straight tarmac drive with the big house in the distance.  I just kept up my steady progression, trying to stick with the plan and slowly reeling in those who’d set off too fast.
At 10 miles, I needed to talk to someone ahead of my planned surge, just to give me that psychological boost of being able to say Hi, then Bye.  Only trouble was Bye never happened.  What seems to have happened from a post finish line conversation was that he was flagging heavily and me talking to him gave him a boost.  Secondly, when I went for my surge at 10.5 miles, and then at 11 miles, nothing happened.   Legs in rebellion, down to one pace.
So, last mile surge it is then.  Round a corner, up a small bank onto a grassy trail, just over 1km to go, hammer it, blow past the guy I’ve been tracking for the last two miles.  Back onto the main driveway up to the big house, but the sadistic b@$tards of race organisers have put us back on the uphill portion of it.  About 800m to go, blow past one guy breathing like a train, catch up with a bloke in a distinctive T-shirt I saw go past me at about mile three.  The guy I’d ran most of the last couple of miles with came back to me with a push of his own.  No way I was having that, 400m to go, final surge, no one goes past me like that.
First HM, finished.  Sweaty hand shakes and thanks between me and the anonymous last three mile man, finishers medal and T-shirt, bananas, energy bars, water.
Back to the car to find water and carb drink to start getting stuff back into the muscles, and my huaraches.  Find Tim’s wife and sit and wait for him.
Toe examination shows no real damage, a little bleeding through the tape, but feet feel good.  This was an HM I’d got my eyes on to do barefoot at some point, but I don’t think it’s totally BF friendly.  There were long stretches of good tarmac, and some rough grass, but about 35% of the course was on rough, hard packed trails with loose chippings and stones on them.  It could certainly be done carrying a pair of huaraches to put on for the rough patches.  Didn’t see one other minimalist runner on the day, not a sign of VFFs or any other minimalist shoe other than those on my own feet.
Tim came home at almost dead on his target of 2 hours, which was great for him.  He’s a heavyweight rower and about 220lb on the hoof, with not much of it spare.  He’s “training” for the Paras 10, a ten mile run in boots with a 35lb pack in Sep http://www.paras10.com/ .  He’s getting married two weeks later and is doing it as part of a stag do.
So what else did I learn?
1) drinks at 5.5 and then 8 miles weren’t enough, I should have also gone for the 10 mile water station.  Nutrition was just about right.
2) pacing plan was about right, but needs a bit of refinement.  With more practice, I could probably shave that extra bit. 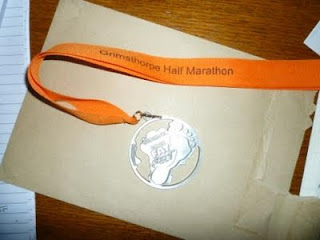 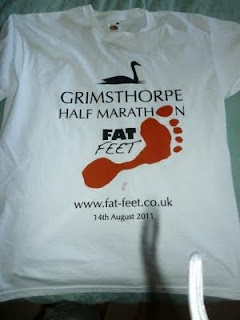