I've been away up in Aberdeen this week, oil and gas again, whch probably takes about 70% of my work, maybe more.  With Aberdeen being the centre of the UK oil industry that means I spend a fair propotion of my time up there particularly in the winter, which is not the best time to be on the North Sea coast.

This week, however, it was pretty good weather, not too hot and light winds.  The plan was therfore to get in a decent amount of running.  Fly up on Tuesday, speedwork on Wednesday, easy Thursday, Tempo Friday, easy Saturday, long run Sunday.

Speedwork went very well.  The HM plan I'm following has it ramping up the intensity, but dropping the distance this week.  So instead of repeats at 10km pace, it's at 5km pace instead, but only 5 x 1000, 3' rest instead of 1200m repeats or more of them.

I decided to do this bright and early Wednesday morning, out of the door of the hotel by 05:45. Warm up as always 1 mile, then into it.  I followed a regular route from the hotel that would have me finishing on the sea front, from where you can get some great views.

really no idea where those paces came from as all I did was pick what seemed reasonably hard, but maintainable for the distance, so perfectly happy with that.  One thing that did surprise me was the number of people out and about in Aberdeen before 6AM.  Last Sunday, I managed to twinge both ankles and for the first half mile, my left was quite sore on this run arouund the achilles are but the pain disappeared.

Thursday never happened.  I'd planned to do an easy 4 miles or so in the evening, but a chemical spill caused even more traffic chaos than usual for Aberdeen and it ended up taking over an hour in the cab back to the hotel.  Walking would have been quicker.  As a result I got back to the hotel too late and went out for dinner instead.

Friday, got out of bed and set out, only to find worse achilles pain than Wendesday,  and a dull ache in the bottom of my right foot, so obviously the ankles had reacted to Wednesday.  After about a third of a mile, I decided to quit, rest the ankles and go again on Sunday, but I did go back and get an extra hour in bed.

Saturday, I decided to take the weight of the ankles and cross train instead on the indoor rower.   Went for 3 x 4km, with a 2 min rest between pieces, target HR<160, pace target 2:03-2:09, ready to back off on pace to manage HR to target.  As a nice warm evening, I opened the garage door so I could sit and look out as I erged, only problem was the sun was setting and with a west facing garage, it was just at the wrong height to dazzle me.

Now here's the coincidence.  Spookily, the total tiem for the 12km was exactly the same time as the intervals on Wednesday, what are the odds of that happening?

This is also where the carrots came in.  Where I live in East Anglia is a big vegetable farming region and carrots tr in season and dirt cheap at the moment, so I thought I'd make a batch of carrot wine as it's not one I've tried before.  The wine is now going well in the garage, but the only thing is that to extract the essential sugars and carrotiness, you end up with about 6lb of boiled carrots.  I did have one lareg helping for a snack with olive oil and black pepper, but there are only so many carrots you can eat.

So yesterday, Sunday went here http://www.nationaltrust.org.uk/main/w-vh/w-visits/w-findaplace/w-wickenfennationalnaturereserve.htm. We took out membership of the National Trust earlier this year, and this one is just down the road.  This time of year it's teeming with butterflies and dragonflies, some up to about 3 inches body length and irridescent colours.   It's also bloody hot.  We'd ended up delaying the planned morning trip to the afternoon, and I had intended running home.  I drank plenty of water walking around and was carrying more, but even so I ended up moderating my pace to account for what was now about
28 degC or so.  It was  great run, along the river with Ely cathedral in the distance as a target point adn plenty of wildlife around as well, including one black and white bird that I'd never seen before and didn't manage to photograph.  By my bird recognition book and my memory, it appears to be an oystercatcher.

The only photo I took was this one, I love the crooked telegraph poles marching across the Fens. 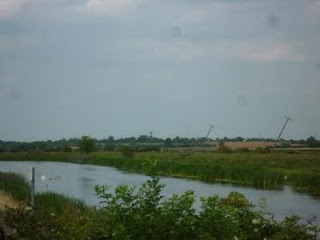 Drank about 500ml before I started out, 500ml of carb drink during, and another 500ml of water on arrival at home.  I was still about half a kilo down in weight.  It was dammned warm and sweaty out there.  If it's this hot for my HM in two weeks, I can see me moderating my pace a bit otherwise HR will be unmanageable, although the surface should be better which will help.

And the cowpats?  The path was liberally strewn with them, mostly dried, but one or two fresher ones.  I managed to avoid stepping on most of them, apart from one.  And yes, it was one of the fresher ones.  Next tiem you see one, be careful, the fresh ones are very slippery.

That's it for this week.  More cross training next week as I'm at home for a cyling club time trial for the first time in a while.  It'll be interesting to se how I fare having had very little time on the bike this summer.
Posted by The Athletic Diabetic at 11:28