I’ve been struck down in the latter half of this week with a mysterious injury.  Last week’s hotel had a very soft bed indeed, which as well as stopping me sleeping properly has been known to trigger back/neck problems as well.
On Wednesday morning however, I was up in (again) and went out for my morning 5 miles.  All was going well until, crossing a sidestreet I was distracted by something out of the corner of my eye and looked in that direction at just the wrong moment and as I stepped up onto the kerb, I caught my trailing leg and went sprawling.  My knees took the brunt of it, but I also landed heavily on my hands, picked myself up, dusted myself down, cursed my stupidity and went on my way.  The worst of it was skinned knees, considering I know people who have fractured wrists in similar circumstances.
So I woke up on Thursday morning (good start) and went out for another 5 miles, OK, no problems.  This time in my Merrell Trail Gloves.  I hadn’t worn them for about two weeks, having run exclusively in huaraches or barefoot, so it felt quite odd to have the top of my feet fully covered, and I noticed the subtle difference in feel from the huaraches. Perhaps their new Road Gloves may be more suitable for me.
Anyway, by Thursday evening, I had started to experience some fairly significant discomfort in the left side of my neck, upper back, and shoulder.  I hardly slept that night and it was worse in the morning.  No way I could run.  Two ibuprofen allowed me to work during the day, but that was it. I thought a couple of glasses of wine on Friday night might help me sleep, but no luck, and it had completely seized up in the morning with very limited mobility in my neck, so I was up at about 0500 to have breakfast and start watching the rugby world cup.
Strangely, it seemed to get better during the day, so I ventured into the garage in the evening to have a bash at the turbo trainer.  I full expected pain from the neck to drive me back inside pretty quickly, but it never happened.  I ended up doing the full hour no trouble and actually felt a lot better than I thought I should.
Taxc 722 cals / Max 232W / ave 215W
Garmin - 1 hr / 18.6mi / AHR 142 / MHR 149 / cad 95 / 760 cals
Saturday night was not a whole lot better for sleep, waking several times in the night, but again, during the day it felt much better, so I headed out for a run.  I decided to go for the New Year’s Eve 10K loop again, knowing that there were several points I could turn back and short it if necessary.  Took my waist pack with a pair of huaraches just in case, and a small amount of the new Bike Food Gel that was delivered a week or so ago along with some water to flush it down.  I wouldn’t normally take either water or gel for 10k, but I wanted to try it anyway.
My technique must be improving as I had no blisters this time and very little post run foot tenderness.  The numbers show the relative lack of stamina barefoot vs shod.  I think the limiting factor is my feet rather than the CV system as I could feel my calves, achilles and feet tiring as the run went on.  I also think the wind was more in my favour on the first half than the second, but that’s the kind of thing you have to put with whether racing or training.
T) 6.35 / 53:30 / 8:26 / A 144 / M 154
1) 8:14 / A 138
2) 8:14 / A 146
3) 8:16 / A 146
4) 8:26 / A 147
5) 8:49 / A 145
6) 8:24 / A144
7) 0.35mi / 3:07 / 8:24 / 139
Anyway, now the product review.  I’ve been using Bike Food’s  (http://www.mybikefood.com/ ) energy drink, bars and their protein powder for a while now, and I saw earlier in the year that they were finally bringing out a gel, which is what I’d always thought they were lacking.  As I was down to my last half dozen gel sachets I put in my pre-order, waiting eagerly for the end of August, only to be told that it would be late by about ten days.  The measure of these guys is that to make up for the delay, they threw in a 500g tub of their energy drink for nothing.
So, to the gel.  It comes in a large flask, 700g with each serving being 40g.  The bottle is clearly marked on the outside for you to be able to decant it into the small flask they supply with it via the easy pouring lid (similar to a squeezy HP sauce bottle).  The flask has a non-drip spout similar to a sports drink bottle.  The intention today was to test the leakproofness of the flask and taste the gel ahead of a couple of hopefully reasonably long rides early next week. 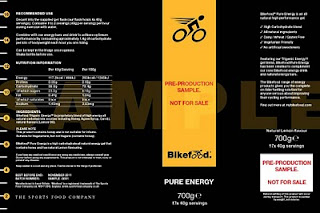 The ingredients and label design
First impressions on opening the bottle were a clear smell of honey and lemon, not dissimilar to a cough syrup but without the medicinal twang.  Very mild and pleasant smelling and clearly shows the origins of the natural sugars from honey and agave.
Only a minor issue, but the small pocket flask is ungraduated, so I added my own as you can see ( I think I need to do that again as I was not the most accurate), the flask appears good for 5 doses which is going to be enough for most runs/rides. 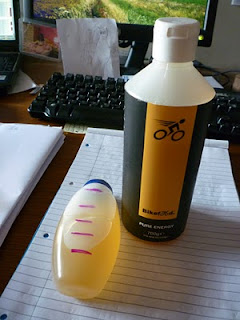 It tasted pretty much as it smelt, with a good flavour of honey and then the tang of lemon following it.  I’ve tried a whole variety of gels, and so far only this and one other are ones that I would ever consider using.  I’ve found Hammer’s and Zipvit’s both to be way too thick in consistency and nasty flavours as well.  This and High-5 both have a syrupy and smooth but not too thick texture so they are easy to get down and only need a little water to rinse your mouth. 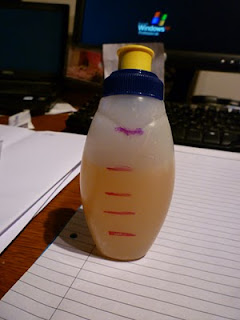 Overall this is a great product and I can’t wait to try it out on a longer ride or run.
Pros
Cons
Overall I’ve now tried all but the energy sweets from Bike Food and I like them all.  They’re a bit more expensive than some other brands, but I think that’s reflected in an apparent attention to detail.
The bars are based on cold-pressed dried fruits (dates and so on) with added flavours like mango or cocoa and plenty of nuts.   The drink has added BCAAs, minerals and vitamins and has a great flavour and is gentle on the stomach.  Their protein powder is unique in that it is vegetable based.  When I went dairy free, I was struggling to find a product that was non-whey based and non-soya based (I don’t like soya because of its links to hormonal imbalances).  Their protein powder is based on milled hemp seed.  It tastes a little odd to start with, but once you get used to it it’s great.  I’ve used it in bottles and also a scoop added to my porridge in the morning every now and then.
Overall, I think of the products I’ve tried theirs is right up there at the top for me.
Posted by The Athletic Diabetic at 19:02