So, this was it, the main event of the year, the one I've been training for for 6 months or so.  The last two weeks I've been steadily gathering equipment and nutrition together in a corner of the bedroom.  I knew I had too much stuff, but I was taking advantage of the fact that it was 10-mile loop course and that we could pitch a small tent at the start/finish of the lap, perfect for changing shoes, socks, shirts etc.

Firstly, getting there was a challenge as on Tuesday I managed to wrap my car around a tree.  I walked away fine, but the car is written off.  Big thanks go to both my yoga teacher Mark at Ely Yoga Studio who leant me a car and to the people at Admiral Insurance who kept my policy active until Monday to allow me to get to the race. 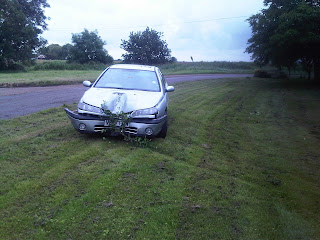 The weather forecast was for heavy rain all night and heavy rain for most of the day, so I'd packed several changes of socks, plus shorts, shirts, running leggings, all in plastic boxes and bags to keep them dry.  I'd taken my old Merrell Trail Gloves, Altra Samsons and New Balance MT00.

One look at the conditions said the Altras had no chance, and I opted to start in the NB Minimus to allow me to fit my sock selection underneath.  I had my last three toes on each foot taped against blisters, plus Injinji socks and then Sealskinz socks on top to keep them dry.  I also started in short sleeve shirt and Ron-Hill running tights, plus waterproof and cap to try and keep rain or sun off my face.

Plan was one 500ml bottle of nuun, one of carbs per lap plus a couple of gels one large energy bar and various combinations of small energy bars, fig rolls, malt loaf etc.  Overall it should have given me about 750 cals per lap, or 375 per hour (assuming two hours per ten-mile lap).  Al to be carried in a waist pack.

The day started ominously with the race briefing at 8am, when started raining already.  Catch up with all the people I'd met on facebook, then last minute preparations, toilet stop, waterproof on, check moustache (freshly waxed into handlebar for the event) and then it's time to go.

First lap, starting into the rain about 1km drag up the main drive to the castle and to the start/finish point of a normal lap.

The course is in the grounds of a country estate, about 50% tarmac and the rest off-road on farm trails and field margins.  It was set up with one manned check point and two other unmanned interim checkpoints where you had to punch a card to show you'd completed the lap, with the card checked each time at the start/finish tent.  Last year I did a half marathon here in glorious weather and it was a superb course.  Today was going to be a lot different.

First lap started great, long drag down from the castle on tarmac before the first offroad section up a small hill between fields and woods, topping out to run between some more fields.  Carry on with that for a bit with a few undulations and then down to what I found to be a tough bit last year (and I'd built up in my mind for this year as well).  A stretch of cinder/large spiky stones that I remembered as sbeing about a mile, in reality it was probably less than 500 yds.  A bit more hard packed trail and trun onto a short tarmac stretch again before the fun and games really began.

The first really off-road section as you turn into the woods.  This section was already getting cut up by the time I'd got there, especially the only real serious hill on the course.  Very short probably 200-300 yards, but about a 45 degree angle and muddy.  First lap was OK in the trail shoes, but it was already getting slippery.  I did need to think about managing my HR here though as I went over 160 vs plan of keeping it under 150.  So walk here next time.

This topped out on a long stretch of rough grass through the trees following a fairly well defined path which was wet, but runnable.  You could still pick out dry ground at this stage to run on.  Pretty much more of the same hard trails, dodging the puddles until the first check point.  About 30 secs to drag the card out of my waist pack and punch it then another long stretch down the edge of a field before getting back to the main stretch of tarmac about three or 4 km long, straight as a die and undulating.  Last year on the HM I used this to pick off about 15 rabbits one by one; not today, just keep it steady, maintain my 150m per 2km walk and get the food and liquids in. 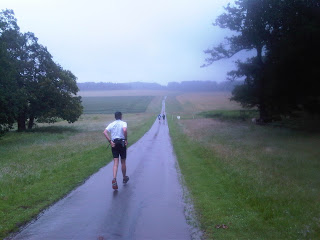 I didn't take many pictures during the race, just too wet for the camera﻿


Still raining at this point about halfway round the first lap, but the sock strategy is working well and my toes are toasty and dry.  A major difference this year was the river crossing; last year you ran through a dry stream bed, this year you had to take the rickety bridge as there was about 4 feet of water in the stream.  More field edge then up to the final interim checkpoint, stamp the card and carry on.  Similar mix for the next 2 or 3km and the end of the first lap.

Into the tent, get the time logged, refill bottles, grab gels and bars and out again.

Main difference this lap is that the showers are getting heavier and more frequent and the off road sections more cut up.  In some cases the puddles were right across the track and on the hills water was beginning to run down the paths.  The stretch through the woods was very slippery on just the second lap, this time I walked the hill, and the grass wea getting pretty waterlogged by now.  The socks were still working though and the feet were nice and dry.

The third lap was where it really started to come down.  On the grass stretches you could no longer avoid the wet bits and your feet were sinking 3-4" into it with every step, with water streaming through your shoes.  The waterproof had been overwhelmed by now, but was keeping the wind out so I stayed warm, and my cap was absolutely saturated with water dripping off it steadily.  The paths were now getting quite difficult where there was no tree cover with some pretty slippery mud, bit no trouble if you took it cautiously. The stretch up the muddy hill and through the trees was treacherous with one faller in front of me.  The stretch that followed now resembled trench warfare with no dry spots at all.  I think it was here that my socks finally came a cropper as I stepped in one puddle just too deep.  The rest of the field margins were the same and the rain was now running in rivulets on the tarmac.  The conditions were starting to take their toll by now and my ITBs were starting to feel the continuous sinking into the ground and the slipping and sliding around.

I started the fourth lap and went past my longest ever run to date, but feeling pretty tired by now and extending my walking breaks so that I was now around 1 mile run/400m walk and also walking some of the wetter sections.  The ITB and hip flexors were now really tightening up on me and making it difficult to keep going.  Pace was really starting to drop off now from 6:30-6:40 per km to now struggling with 7:00 per km.

With no visible signs of the rain stopping and the prospect of more of the same, I called it a day.  I could have probably continued for another lap, maybe even more but the way the ITB was caving on me it wasn't certain and I could see myself doing some long-lasting damage.

Broadly speaking I was on plan for my target 2 hours per lap, to finish in 14-15 hours.  Given last years conditions I have absolutely no doubt that I would have finished.  Maybe not to time, but I would have completed.  Overall I was expecting my knees or achilles to be the thing that dumped me out, not the hip flexors and ITB.

Afterwards, I sat in my tent for a while, feeling sorry for myself.  Once I'd started getting changed and made myself some hot coffee things were looking better.  It's surprising how much difference being warm and dry makes.  After that I went into the main checkpoint tent for some physio attention to the ITB and adductors.  One particular ITB treatment was excruciating, but did feel better afterwards.

So what did I learn this time, that will help next time
1) Sock strategy worked well, but I need some longer sealkinz.  No blisters at all, but the feet still got wet.
2) Be prepared to adapt the plan to the conditions.  Maybe if I'd let the walk/run breaks drift adn walk more of the really soggy stuff I'd have put less strain on the ITB/hip flexors and lasted longer, but gone slower.
3) The nutrition and hydration plan worked well.  I didn't quite get in the calories I'd intended, but hydration was spot on at 500ml per hour.  Overall calories were a bit less than target at 300-320 vs target 375, but I certainly didn't suffer a lack of energy and didn't hit "the wall" so the fat metabolism was working fine.  I was pretty much down by a gel per lap and making up at the pit stops, for some reason I was preferring solids.
4) Kinesio taping works.  Having had to scale back training because of knee trouble, I was amazed how good they felt during the race.
5) I need to do more strength work and more speed work, try and deal with the cause of some of these weaknesses.
6) XEndurance tablets.  Someone gave me (and a bunch of others) a sample pack.  Looking at it it appears to be mainly buffers but as the guy who gave it to me said, it really helps with the DOMS.  Now on Saturday evening my legs feel fine, achilles slighlty sore from the work, but the only real pain is in the ITB and hips

I'm supposed to go back on Sunday for a HM again, but with more rain forecast I'm scrubbing it.  In this case discretion is definitely the better part of valour so I've got my first DNF and my first DNS in the same weekend.
Posted by The Athletic Diabetic at 21:33