First a bit of good news, I’ve managed to get a recommendation from my diabetic nurse/dietician for an injection pen with half unit scale, which will finally give me the ability to match and adjust doses more accurately according to exercise and other factors and more importantly, with my level of insulin sensitivity I can finally make corrections for high/low levels taking my high insulin sensitivity into account.


So, today, first long session since last week’s failure in the ultramarathon, this time on the bike.  The plan was a nice 2-hour session on a route I know fairly well and, more importantly, I got to wear my shiny new Team NovoNordisk cycling jersey. Team Novo Nordisk used to be called Team Type 1, as all the riders are type 1 diabetics.  They changed the name with a new sponsor.  As it happens both my insulins are from Novo Nordisk and after a few nice e-mails with their PR people asking where I could buy one as I couldn’t find it online, a shiny new jersey came in the post; sizes are a bit on the snug side though as it’s a large and is fairly figure hugging on my 1.75m, 68kg frame. 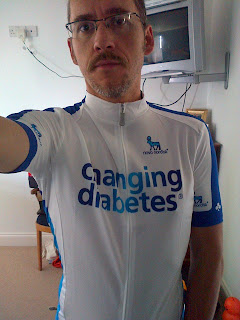 So, to today, as the title suggests, I corrected my morning dosages based on what I’ve learned so far, went out on my ride with no problems, and then while I was out shopping before lunch it all went a bit wrong really, but that’s just another learning opportunity.


And how did this soap opera of highs, lows, more highs and even more lows unfold?  Well, get yourself seated comfortably and I’ll begin.


Let’s begin at the beginning, as with all good stories, and in this case the beginning is breakfast.  Waking blood sugars this morning of 5.4, right on the button, a nice breakfast of porridge and stewed plums spiced with cardamom, cinnamon and star anise for a total of about 40g of carbs.  My normal dosages in the morning would be 6 units of basal and 2 units of rapid acting for that much carb, but knowing what was to come with an extended exercise session less than 2 hours after eating, that was taken down to 3 units basal and 1 unit rapid acting for the mealtime bolus. The expectation here is that the blood sugars will rise towards the high end of my target range before I set out but that the exercise will deal with that.


The ride itself went almost perfectly.  The weather was ideal, overcast, slightly on the cool side but warm enough for short sleeves and enough sun to keep you warmed up, light winds and light traffic.  What more could you ask for?


And how did the blood sugars behave, I hear you ask?  Pretty dammned good is the answer, until I got off the bike. The strategy was to test every half an hour (I’ve got no idea how Team Novo Nordisk does this and still races) and to feed in the carbs as necessary, cutting back if the levels went too high, adding more if it looked like they were dropping.  To cut a long story short it went a bit like this.

So, I retested just before I started out and you can see that the level has gone up, as expected due to the low mealtime bolus, but still within my normal range of 4-8.  For exercise like this, I’d be happy to run up nearer 10 without taking any action.  I had no carbs for the first half hour and you can see the effect that had, taking me almost down to my lower limit.  A bolus of two slices of nice sticky malt loaf sorted that out nicely.  I then decided to give myself an intake of 15g carbs every 15 minutes, a nice easy round number to think of.  It also happened to be 200ml of my liquid carbs and about 1/3 of my solid energy bars.  By the way, when I set out on something like this, I have a pretty good idea of my caloric needs, which is not far from what it used to be pre diagnosis, so I stock up ready for that, but also tuck a couple of reserve energy gels in one of my pockets just in case.


As you can see the 15g every 15 minutes did the trick nicely from there on, remembering that there is also some inaccuracy in the test itself.


One thing to also note is that I’d be continuing to burn carbs after I stopped, to replenish the glycogen in the muscles, so to take care of that I had another 25gr carbs before my shower.


A quick cup of coffee and a shower later and I was ready to go out into town, to the farmer’s market and pick up a few bits and pieces, taking my son Rohan with me.  Some time together and a bit of fresh air for him.  As usual, and being a good diabetic I tested before I drove, 8.9,a bit high, but that’s the extra 25g carbs kicking in, at least I’m good to drive.  Off we go, a few stalls into the market, local eggs, tomatoes, a nice sour dough rye bread and look at the next stall as my head is beginning to go a bit fuzzy and sparkly lights appear in my eyes! Time to test I think – 3.7, not technically a hypo, but getting there and a massively rapid drop.  That insulin sensitivity really giving me a kick up the arse.  Like a good T1 I had my test kit and snacks with me at all times, so 20 g carbs and 5 minutes later while also trying to stop Rohan wandering off (special needs and doesn’t sit still easily while I’m testing and eating) and I’m feeling Ok again.  Drop a few things at the car and restest, back up to 4.8, good.  Even so, I snuck in a couple of garibaldi while walking around Waitrose and paid for the opened packet at the till as I left, just to make sure I stayed OK to drive.


So back home, anticipating that I would stay insulin sensitive for some time, I cut a generous slice of that fresh sourdough rye bread, toasted that with a pile of eggs and some smoked mackerel.  Very tasty.   Overall this bit looks like this.

As you can see I only had 1 unit of bolus with my lunch.  Normally that much carb would mop up 3 units.  And for the record, my +2hr reading was 6.3, a perfect score when you’re aiming for a post-meal rise of no more than 2mmol at +2hours.


Put this lot on a graph and it looks pretty cool. 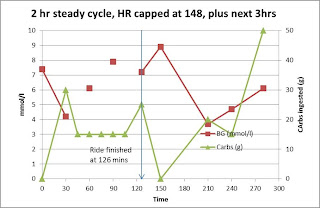 I think that shows the roller coaster pretty well.


Taking a step back though, what does this all mean?  Well looking at the insulin profiles, all my breakfast bolus would have been well out of my system when I had the post ride crash, so two things spring to mind; 1) extreme insulin sensitivity and the GLUT4 receptors also playing a role in depleting my cisrulating carbs with the post ride walking around 2) I need to cut the background dose a bit more to account for the post ride insulin sensitivity,  Maybe down to 2 units.  Only further experimentation will tell.


I can definitely say though, that this was a good learning day.
Posted by The Athletic Diabetic at 21:39