So, Thursday 31st July, kit bag by the door, running kit checked, nutrition checked, medical box checked, camelback checked, tent checked.  In reality it had all been checked at least 5 times already but I checked it again anyway, and still nothing wrong.


The one place there was something wrong however was the achilles. About a week before the race I’d posted on facebook that I rated my finishing chances at 60:40, and it had survived a 98km bike ride the day after.  Another week of rehab and I was optimistically thinking 75:25.  This had the potential to become my bogey race after two DNFs in previous years, one in awful conditions of torrential rain for 12 hours before and then for 12 hours of the race (it has longer events than 40-mile as well) and then in very hot conditions, similar to this, but with training disrupted by my diabetes diagnosis.   This time though I was determined to finish.
The nutrition and insulin strategy had been discussed with the Diabetes Specialist Nurse at the hospital and based on recent performance we’d settled on 1 unit basal, a good breakfast with no bolus and keep an eye on it before and during the race, taking my half-unit pen with me just in case.  The risk with the pre-race strategy is that I’d drift too high with no bolus, the optimal point being around 8-10mmol/l to allow a drop in the first 5-10km and then hopefully a steady rate through the race, eating to the meter.   Of course there was always the possibility that adrenaline would kick the blood sugar higher as well, but to be honest this race has always been pretty low key for me.


So it’s an early start this one, a race start of 9:30 means 5am wake up, 6am departure and 7:30 arrival to get my tent set up, change into the race gear, get race head on (that starts 3 days before really), check and re-check bloods etc, but that early start means a quiet start.  No-one else up at that time of day, all mine.
I arrived right on time and already found a big tent city, luckily room for my small one right at the front, part of the strategy to minimise the rest time and distance from control tent to my tent.  The basic format for this race is a 10-mile lap around a country estate on a mix of roads, hard packed trails and mud/field edges, electronic timing at a control tent and points on the course and returning to your tent each lap for as long as you want, but the clock keeps ticking.
In my case I had my prepared nutrition and hydration strategy, tuned to my race strategy.  Over 10 miles, I was banking on around 2 hours per lap, so 80g carbs plus a bit just in case.  That was in one of my boxes, elastic bands around each bundle of bars and gels.  The camelback would be filled with 2 litres of Nuun hydration solution, which at 500ml an hour (by long standing experiment) should last me 2 laps.  The plan was at least one or two hard, fast (for me) laps until the achilles could take no more with a very quick back to the tent, grab the next bundle and off again. After that run/walk or whatever would get me to the end.  Of course I also had plenty of carbs in reserve and a plan B and C if necessary, but mentally I was prepared for pain and lots of it.
Pre-race the blood sugars went a bit like this
5am Waking 7.0 (high in rebound from a hypo the night before, why then of all times?)
Breakfast 45g carbs, no bolus, 1 U basal
+1 hr, driving 6am 9.7
07:30 – 12.2  - I’m getting a little twitchy here with the novorapid pen
08:30 – 7.3, not quite sur ehow that much of a drop happened on that little insulin
09:00 – 7.3 – a quick fig roll just in case
Race briefing over, assemble at the line, another wait for the cows to be moved, another quick test on the line 09:20 – 6.1 what happened to that fig roll? Half a 9-bar for luck.


Lap 1 – intention run it hard, but maybe not as hard as I did, completed in 1hr 32 including the return to the tent for supplies, a record for me at this event and not far off training pace for a 10-mile run.


5km laps were 26:47, 27:37 and 29:00 so slowing a bit but also reflecting easier terrain early in the lap. Drinking at the 5km tests and where I was walking the uphills and more difficult sections.  BG was pretty much behaving itself with 5km tests of 9.2, 7.2, 6.7.  A total of about 70g carbs taken during the lap, so that would be about 45g per hour, pretty much right on schedule.


Quick return to the tent, pick up the next bundle of food, and out, no need to refill camelback or bottles, time check and off I go.


Only problem was it was just starting to warm up now, but I still wanted another faster lap while the achilles was holding up.  On the first lap it had really not been painful but there was a bit of discomfort moving around between heel and lower calf, but nothing worth worrying at.  Second lap it really started to bite; not so much the achilles but more so casuing other issues.  If I kept myself landing fairly flat footed in the middle, the 6mm drop Inov-8 TrailRoc’s were aiding the achilles, keeping that eased, but then the gait was throwing more strain onto the hip flexors and quads as I began to discover.  Towards the end of the second lap the early pace was beginning to tell, and I was thinking about going onto a yomp style 1km run/1km walk for the next two laps.


Total carbs about 40g in 1hr 46, so pretty low by any standards, but eating to the meter seemed to be working OK. At this stage a quick remark with Keith, the organiser cemented the walk/run strategy in my mind.


Lap three started to get really tough, hot, no cloud cover, humidity increasing all the time.  Added to that the pain in my quads was spreading to hip-flexors and ITB, but the walk 1km/run 1km was pretty much stuck to apart from increasing the walk on one field margin section of pretty hard going and uneven ground, only to have the next run on easier ground extended a bit as well.  To be honest this was now getting bloody painful, but I knew that having done the best part of three laps and having DNFd twice, it was going to take a lot to stop me completing that last lap.  It was hurting, but I was in a better mental place than ever and prepared to go through any pain and out the other side.  The thing that really sticks in your mind during these things is the other people, all going through the same personal trials as you but every one of them in this race full of smiles and chit chat as you pass each other, no matter who’s going faster or slower, makes no difference.


Lap 4 has no other way to describe it than 10 miles of pain.  Quads on fire, hips on fire, brain on fire; I’d been drenching my Texas Longhorns baseball cap every lap at the control point and it was giving me about 15 minutes of cooling before it was dry again. Oddly enough although my head was roasting, I kept getting waves of cold throughout the race and waves of sickness as well, but that’s all part of the fun.  The run/walk was becoming fragile now and was erring towards 1250/750 and then later in the lap became run when I could and walk when it hurt too much.  The odd thing is that throughout these last two laps I was able to maintain the same running pace as always and a pretty decent pace as well at around 5:30/km or a 9-min mile, the only thing was I couldn’t keep it up and it was as if my legs were just switching off.  I also ran out of water in that last lap with about 4km/2.5 miles to go, which was not at all ideal.  I’d checked in before the start of this lap and was lying 19th, but I knew I was passing others. My walk was quicker than some people’s run and as always I was passing people I’d seen go past me on laps 1 and 2 and with a quick word established that they were also on the 40 miler.

Eventual total time 7 h 50, finishing 13th of 107.  I’d passed 6 people on the last lap, or they’d pulled out with less than 10 miles to go.  Considering the achilles problems going into this I was chuffed to bits to finish where I did and ran over the finish line a very tired but happy man.

Then the recovery started, coffee, eggs, ½ bagel and PB and plenty of nuun hydration salts and water. Post race BGs


Total for the race about 240g carbs, so around 30g per hour while racing, much lower than any text book would suggest. I think the reason for this is my years of low heart rate training which have effectively trained me to utilise my fat burning/fat reserves very effectively at these moderate pace for long durations.


And the next few days? Ouch!


I went down to see my sister in Hampshire for a few days and being bothered about potential insulin sensitivity and erratic blood sugars I asked the other half to drive. Only trouble was that sitting still for 2 hours had my lower limbs seize up completely so when we stopped at the halfway mark for lunch I had to take over.  The next two days were not fun with stairs being a particular problem, but just walking along my quads would occasionally fail to fire on demand, threatening to dump me unceremoniously on the floor.  I was also finding other things not working well, such as my shins which were in agony and both ankles.  I also found a very unexpected piece of chafing on my rear end.


Four days later though, a 2 hour bike ride at an average 18.5mph (28.5kmh) was tough on the legs, but the HR was solid throughout.


Mission very definitely accomplished.  Now for 2 weeks off running and then a 4-week campaign before my next event a fast road half marathon.

Plus a couple of piccies, tent farm, castle, assembled throng of loonies 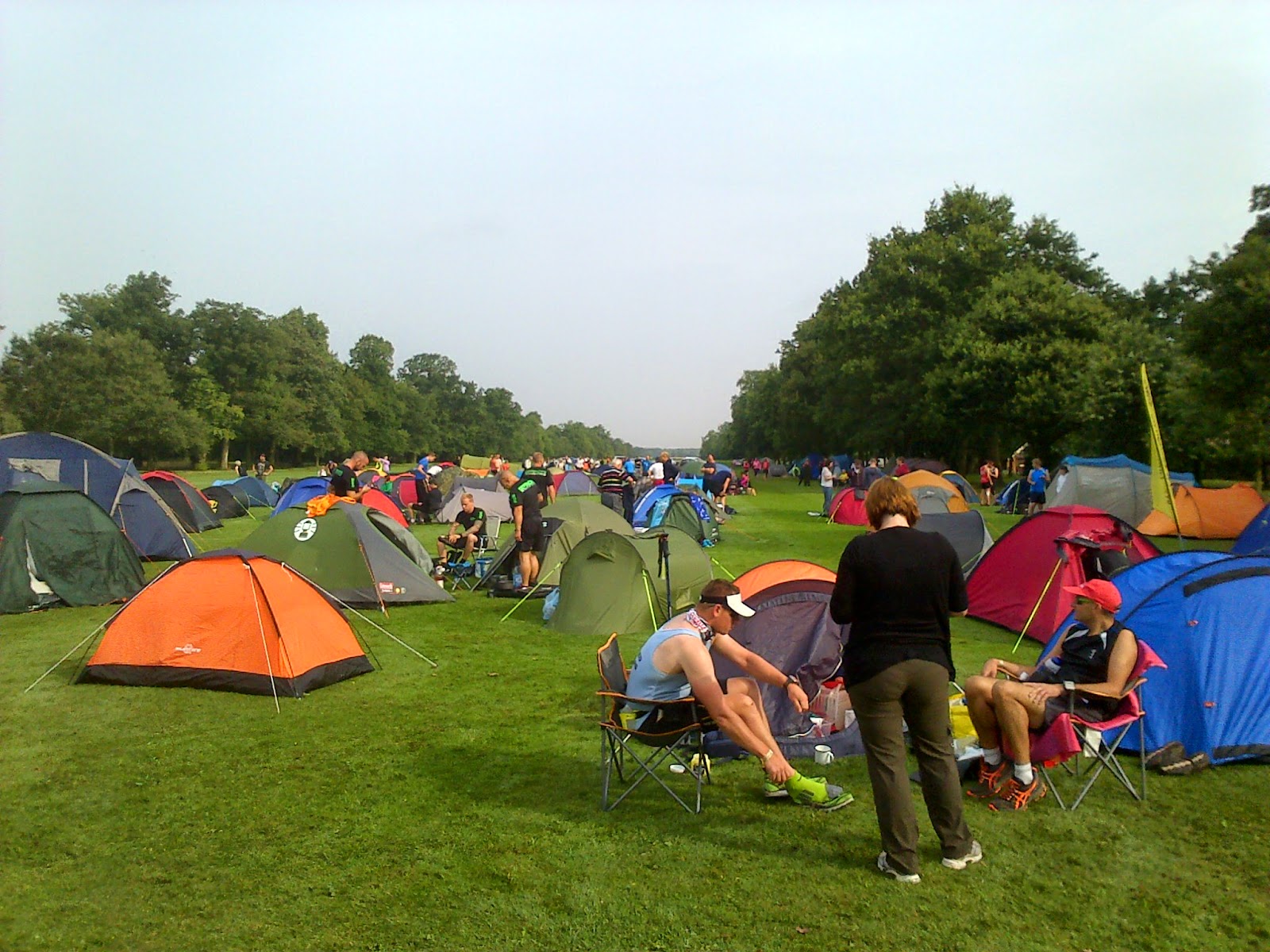 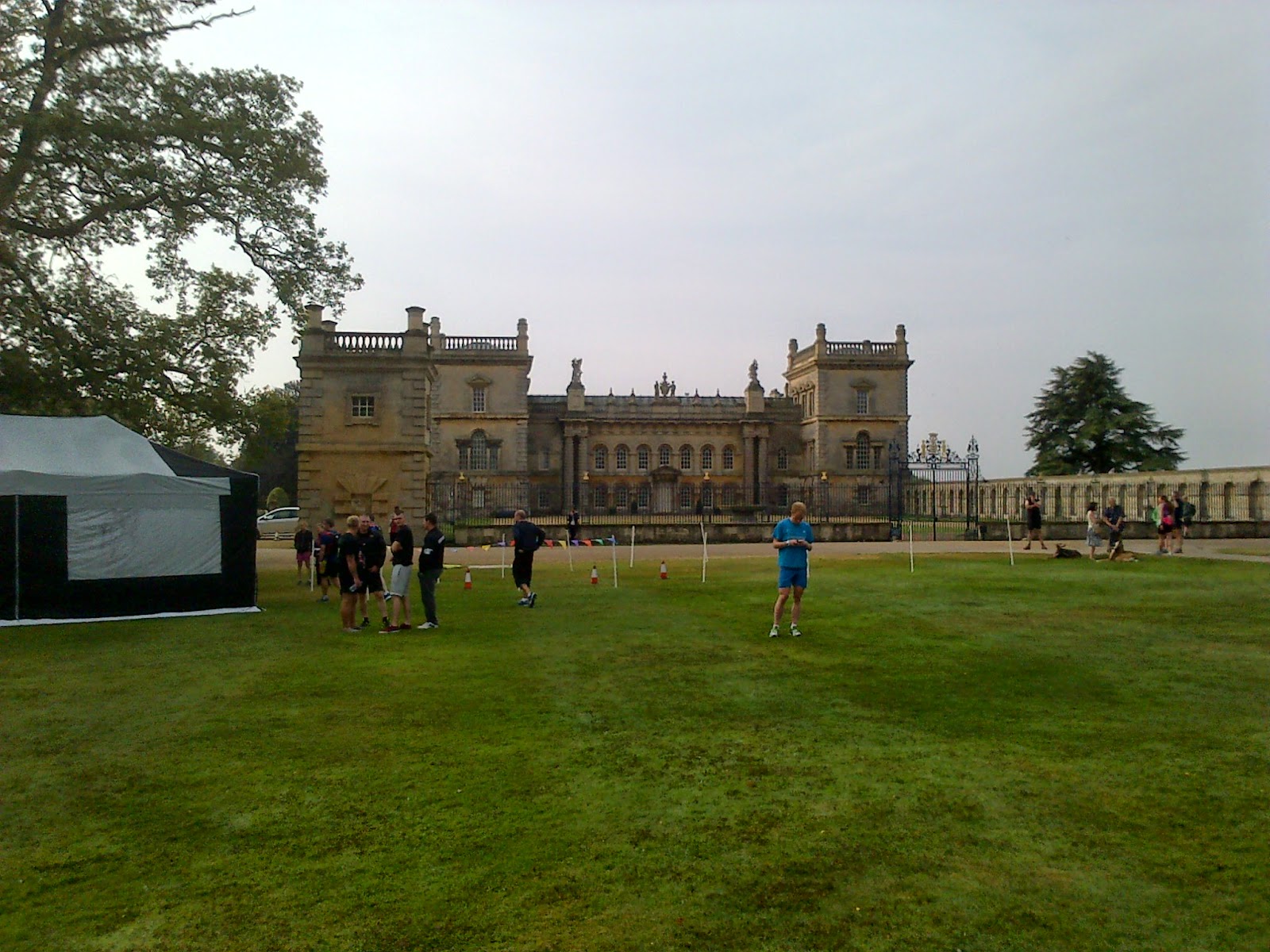 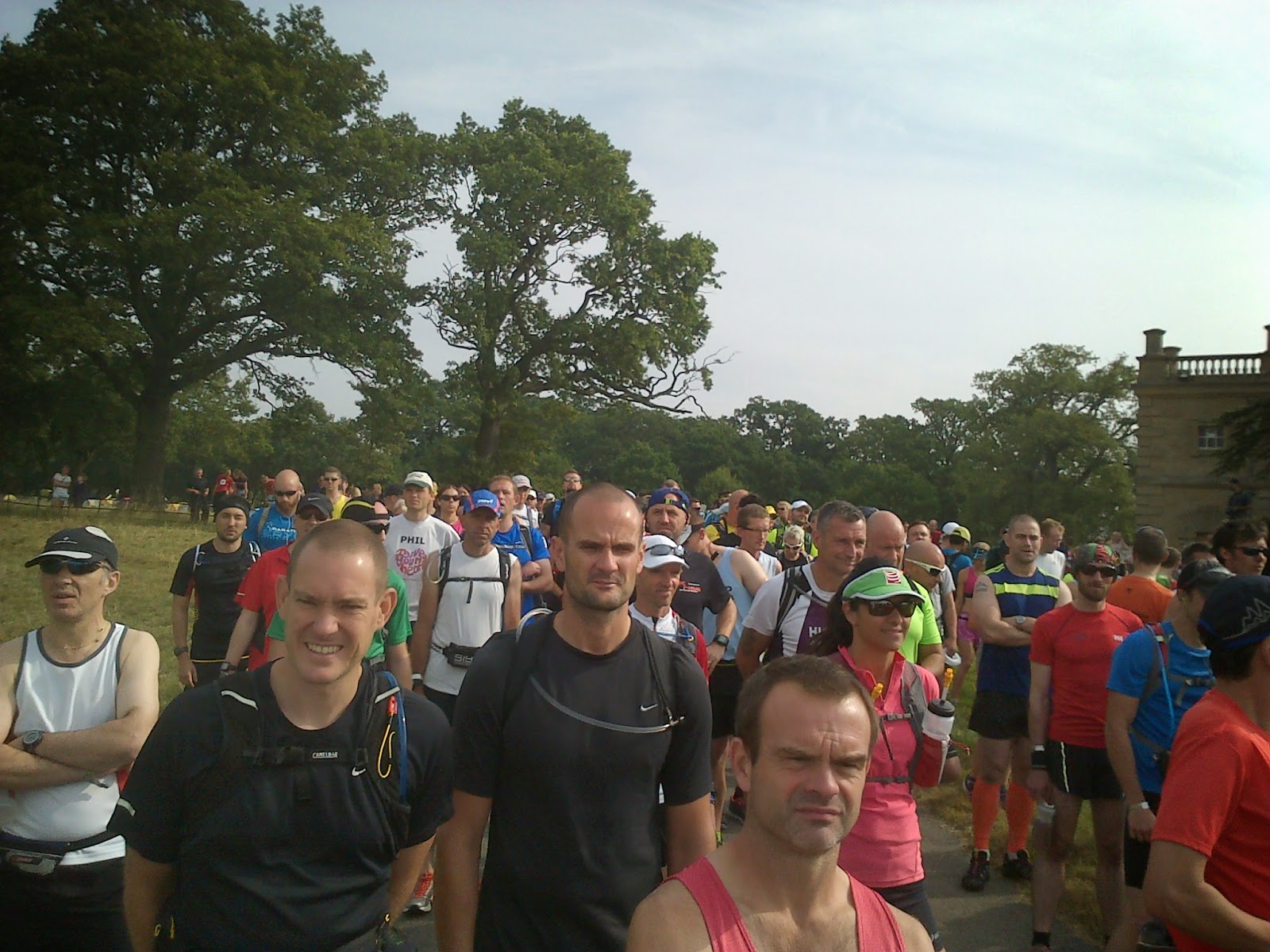 Posted by The Athletic Diabetic at 23:06