So why am I comparing an out and out off-road fell running shoe with a trail running shoe you may ask?  Well, I’m not is the answer, at least not really.   I’m not going to hide it, I’m an Inov-8 convert, currently I have 4 pairs of their shoes all of which fill a niche in my needs and all of which do what they aim to do well.  I’m not a complete shoe snob, I have two pairs of the same ALtra shoe (one not yet worn) and a pair of Merrells, both of which I’m happy to wear in the right place.  I also have a dead pair of New Balance zero drop, but they are now relegated to the indoor rower until they finally fall apart.


But back to the topic at hand. Six weeks before Grimsthorpe, I was happily intending to run the whole race in the X-Talons, but as you know I went and screwed up my achilles.  Now the X-Talon 190s are not really the ideal shoe for Grimsthorpe in the dry as it’s fairly light trails and about 50% tarmac, but I thought my alternatives were a bit too lightweight.  The X-Talon excels in the soft and squishy stuff and on the downhills on slippery wet rocks as I found at the Yomp Mountain Challenge (twice), so is a bit OTT for a dry-ish Grim.
In comes the Trailroc to fill that gap between the F-lite 195 (which is great on the road) and the X-Talon 190. 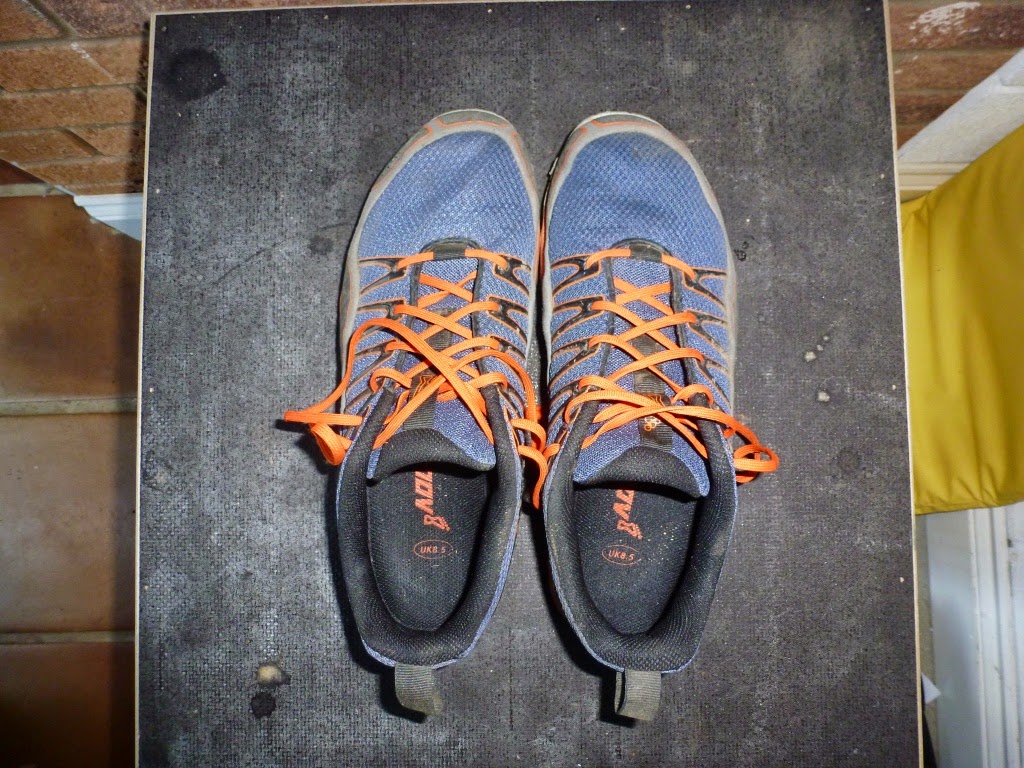 So where is it similar and where is it different? Let’s start with the last, the basic framework of the shoe; the F-lite and the X-Talon are essentially the same show but with a different sole, built on the same natural fit, which some have said is a bit narrow across the toebox.  In my view however the flexibility of the upper and the lightness of the shoe completely overcome that and the whole package is light and flexible.
The Trailroc by contrast, although supposedly built on the same precision last seems much wider across the ball of the foot.  Looking at the pictures, I’m not convinced that it is, maybe that’s an artefact of the Trailroc being a much more structured shoe overall.  If you look at the comparison photos, you can see that where the X-Talon is the pared down  speedster – The Range Rover Evoque perhaps, the Trailroc is the Land Rover Defender – definitely an uprated V8, but still a defender.  It’s clearly built for the long haul, with rubberised bits around the toe to deal with stubbing your feet on those loose rocks and catching edges of things, whereas the X-Talon is designed for plunging into a peat bog and shedding water. 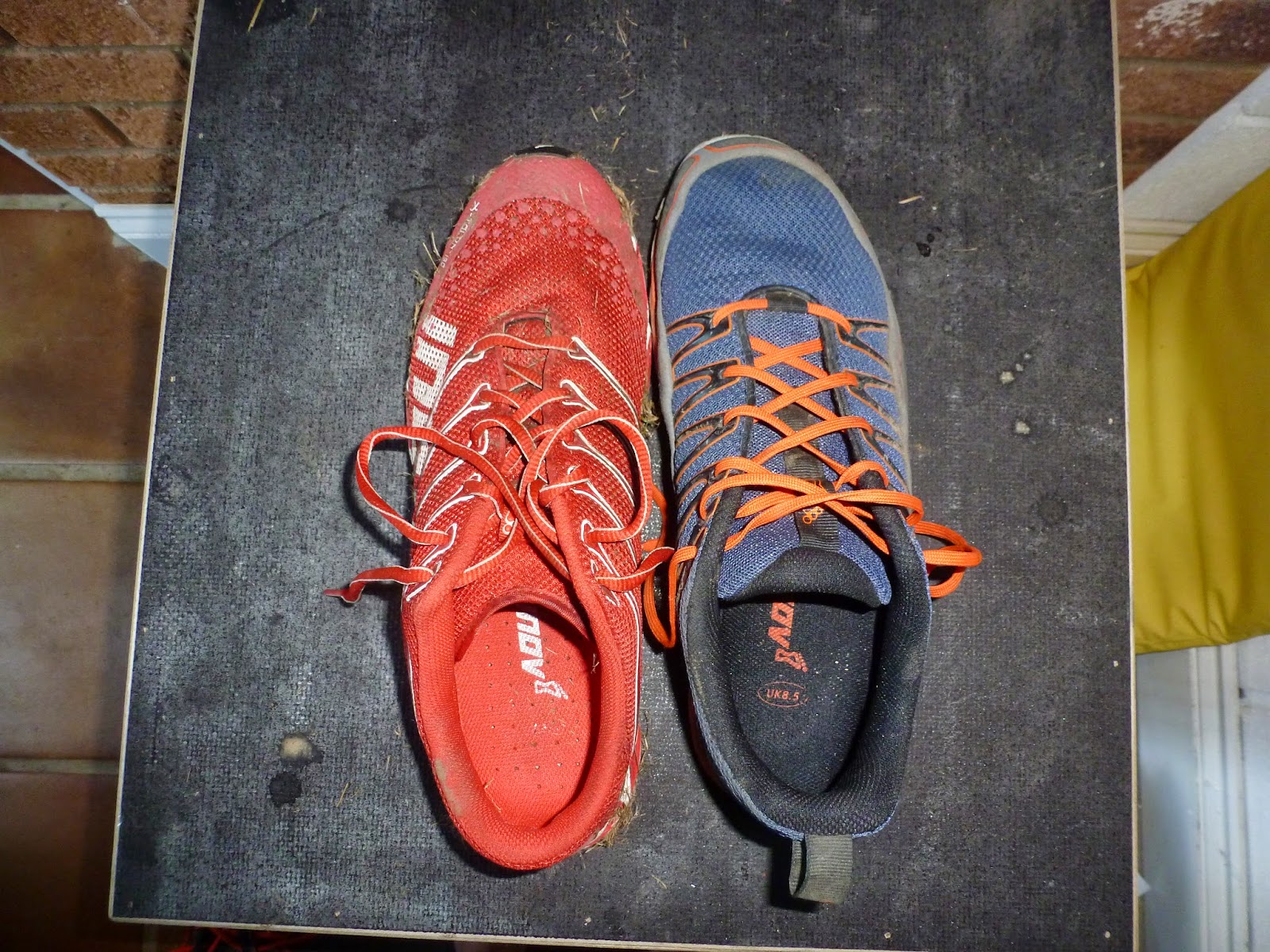 Taking a look at both side and top view it’s obviously a well-made well thought out shoe.  I couldn’t find any evidence of a single manufacturing defect (unlike others where I’ve had to trim a sockless liner to prevent blisters) and looking at mine after a 40 mile race they stand up very well.  Colours as usual are the typical lurid combinations and the ink and orange I have is by far the most sober of the bunch. 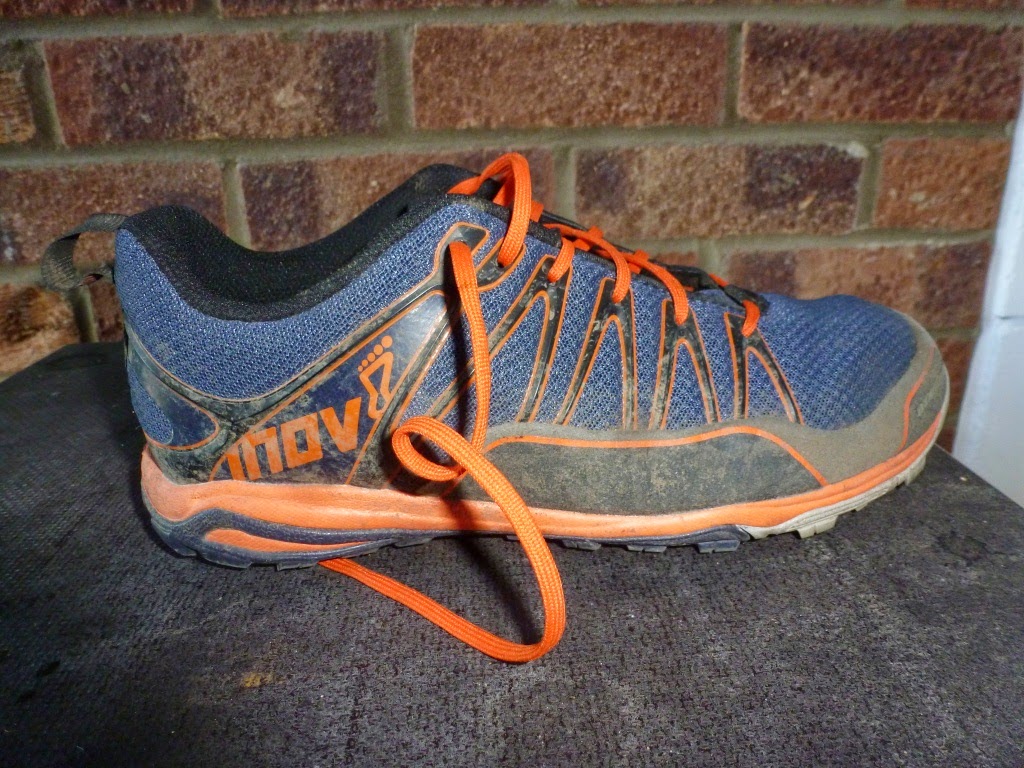 Turn it over though and here’s the interesting bit, looking at the sole it’s got some big beefy lugs, so obviously going to offer plenty of grip on both loose gravel and light mud, but interestingly the lugs are not too big for dry hard trails and even sections of tarmac either on the approach or transition between trails.  The other really interesting thing to note here is the colours and sections on the sole.  Now that’s not just to make the boring part of the shoe look a bit more interesting, but it’s three different compounds of rubber to give a harder wearing compound where the sole takes the most beating (as opposed to my soul which takes a beating on pretty much every run if I do it right).  That’s always been one drawback of the X-talon in that it has a very soft compound to give it the grip, but at a cost of high wear on road and hard trail. 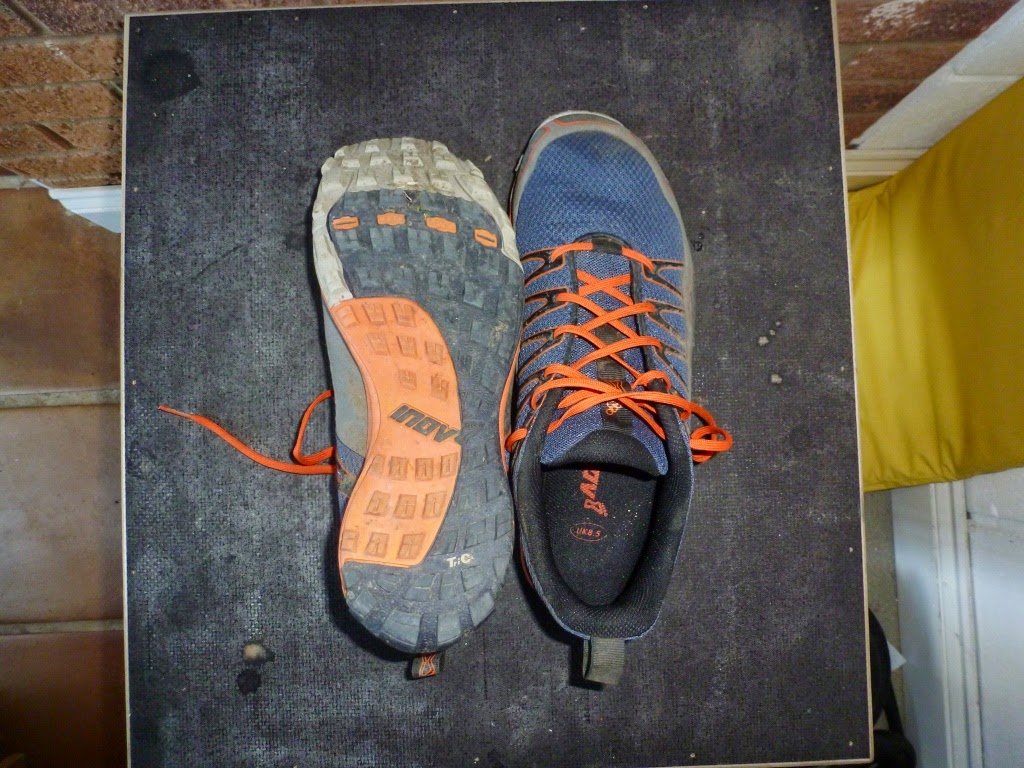 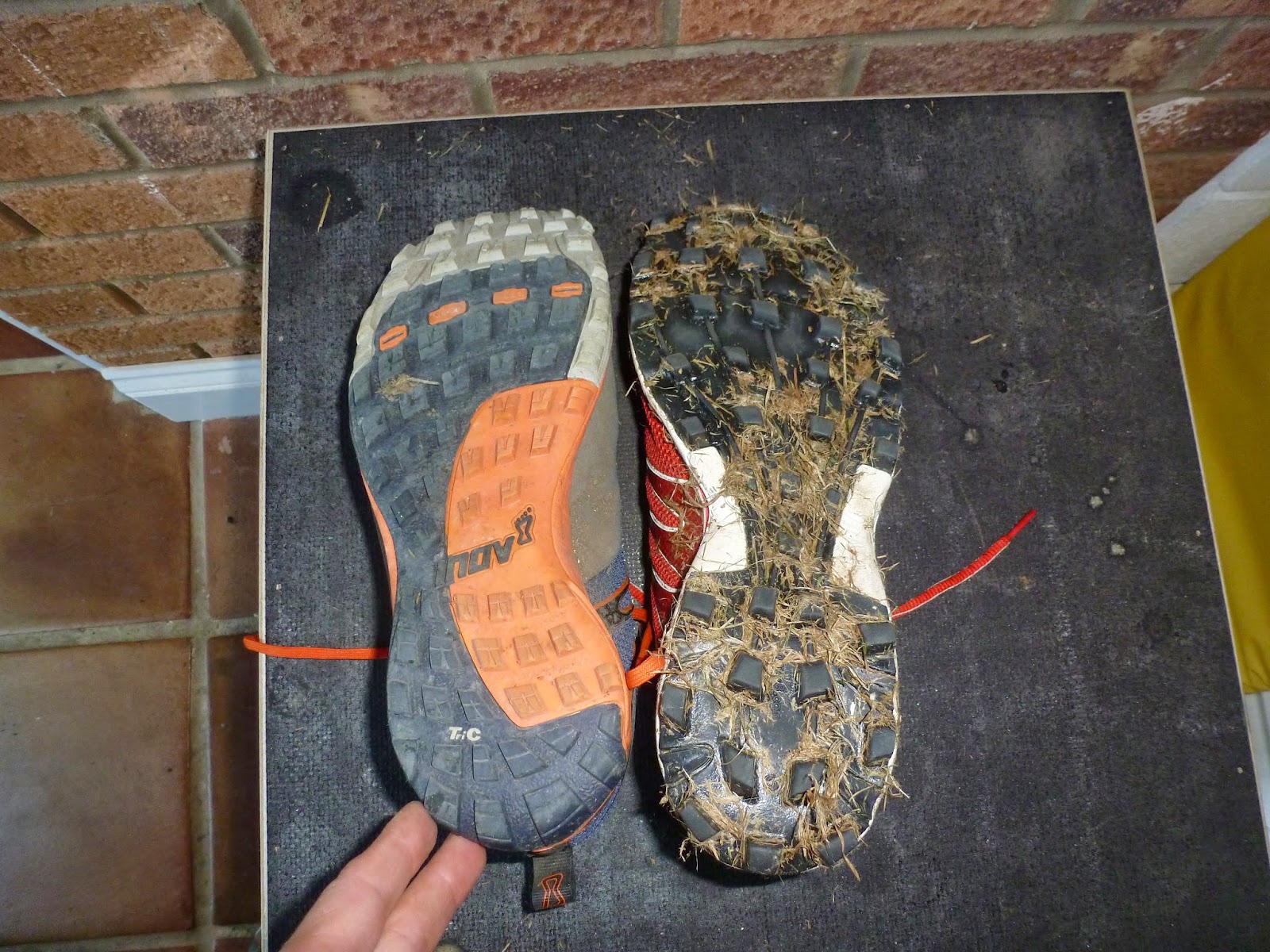 The Trailroc also has the meta-shank stiffening in the sole, which when you are more of a natural runner like me, could be a bit of an issue, but we’ll get to that.
Looking side by side (excuse the debris on the X-Talon, I told you it was a no-road shoe) you can see the slight difference in height and construction, and also if you look closely you can see the one vs two chevrons so a 6mm drop on the Trailroc vs 3mm.  Again, that’s going to affect the wear of the shoe. 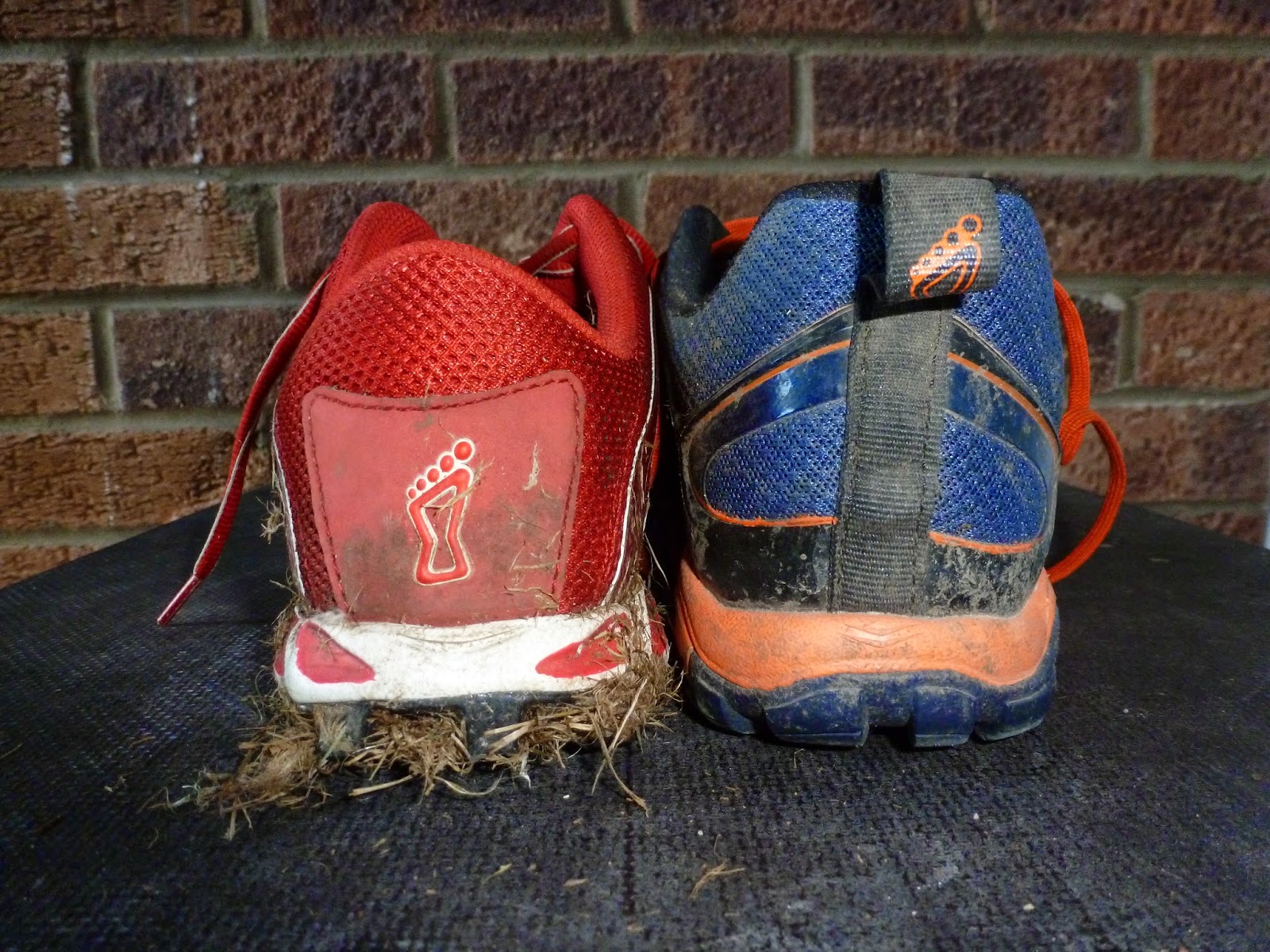 So before we start talking about the experience, let’s summarise the shoe.  A theoretical 255g (mine weigh in at 280 for a UK 8.5, worn a few times) which is theoretically 65g/2.5oz heavier than the offroader, but still a pretty light shoe compared with some of those slow and steady LandCruisers of shoes out there.  As per most Inov-8’s I went a half size up from my usual and was happy with that choice.  The shoe fit perfectly in the width, with just enough space in the toe to accommodate a bit of downhill and a bit of swelling of the feet (I’ve never lost a toenail to running yet and don’t intend to).  The lace structure again has had a lot of attention paid to it, pulling the upper in right along it’s length and providing a very comfortable fit that is improved more by paying attention to how you pull the laces in rather than just yanking on the free end.  That plastic cradle on the outside gives great stability all round without being instrusive and the shoe just hugs the foot to help improve the feeling of ground contact.
I had plenty of toe wiggle room across the front and they felt light and airy once on.  On the run though you can immediately tell the difference between these and the two lighter, lower drop offerings.  With the 6mm drop and the heavier shoe, I was immediately running with a flatter foot, with the footstrike coming back to much more horizontal and a light heel touch rather than the ball/toes of the foot before the heel comes down.  That’s not necessarily a bad thing, remembering after all that I bought these shoes to take some strain off the achilles by altering my gait in just that way.   You can definitely feel the weight differential though, slight as it is, if you’re used to running in those lightweight shoes as I’ve been doing for three years.  Again that has some benefits, as after running in those for some miles, now that I’m back in the lightweight performers for a road HM, my pace is markedly faster at the same HR (also a function of fitness and the good base of an ultra, which is the subject of another article I think).


So, comfortable, but slightly heavy.  What about the rest of it? Grip – perfect for the light, dry hard trails and light mud in my experience so far, also nice and cool with that mesh upper if not quite as good at shedding any water.  The tongue is nice and padded as well to give enough protection from the laces on the longer runs.  Let’s face it, I did 40 miles in a pair of these so they are a decent comfy shoe and robust enough, and that soul is definitely hard wearing and certainly does the job it was well designed for.
Which brings me back to my earlier point, this is not really a comparison at all, but more of a contrast and one that shows that yet again the thought going into the design means that Inov-8 have hit the nail cleanly on the head with this shoe.  So far I’ve no real drawbacks with it and am looking to see how well it goes long term.


Now to the post Grimsthorpe.  Once I’d recovered enough to be able to walk again, I stuck to my word and took two weeks off from running, putting in the hours on achilles rehab, yoga, the bike and a bit of indoor rowing (where I managed to strain an intercostal instead).  That was definitely called for, but then left it a bit late for my HM, just 6-weeks after Grimsthorpe with 4 weeks to try and get some speed into the legs but not set the achilles back to where I started from.
So far it’s not going too badly.  With that lay off my legs seem to have found themselves an extra bit of pace without my asking. They just seem to want to go faster and I’m not stopping them.  Target pace for the HM is sub 4:50 per km and everything has been run at that pace or faster with one exception.  The bike has also had a decent bit of use and that’s where I’ve been doing the steady work.
The pace plan, hydration plan and BG management plan is now all set and has been tried on a 12km at race pace session and refined a bit.  The overall plan is a negative split i.e. starting conservative and getting faster during the race, with an extended 7km between tests, so I only need to test twice during the race.  I’l llet you know how it works in about 10-15 days.
Posted by The Athletic Diabetic at 21:20