In my defence, I've been quite busy

Yes, I know I’m rather sporadic at this, but even I was surprised at almost two months between paltry offerings, but in my defence I’ve had quite a bit happening in that timeframe.

At work, March is normally lunatically busy, but this year it was even more so.  With a Government imposed deadline there is always a bit of a crunch, but this year we just seemed to be less well organised than usual, as a result I ended up putting in about ten days of 12hrs plus to the end of March.  I would be getting up at 5, working for a couple of hours before breakfast, quick stop to eat, work until 5pm, maybe a very short run or something else, eat, and then work again until about 11pm.  And even with that, we still managed to miss the deadline on some of the submissions, and the fall-out is still being felt.

I also bought a new bike in March, but didn’t get to ride it until April.  Here it is, the more perceptive of you will notice that it’s not quite the usual.  I’ve always had a hankering for a recumbent, supposedly much more efficient aerodynamically and more comfortable over longer durations and I’ve been finding that anything over 2 hours on a normal upright bike is leaving me with sore neck, wrists and shoulders these days.  With that in mind I went and tried a few out at a local dealer, and even with a fall from one of them went away with undiminished enthusiasm.  This one then came up for sale on one of the forum boards and even with it being on the other side of the country it was a good deal, done in the car park of a motorway service station half way between me and the seller.  It’s about 5 years old, but has been ridden only a few hundred miles in that time and the previous owner was given a distinct ultimatum to “get that thing out of the spare room if you're not going to us it”. This summer’s project is now learning to ride the bloody thing! 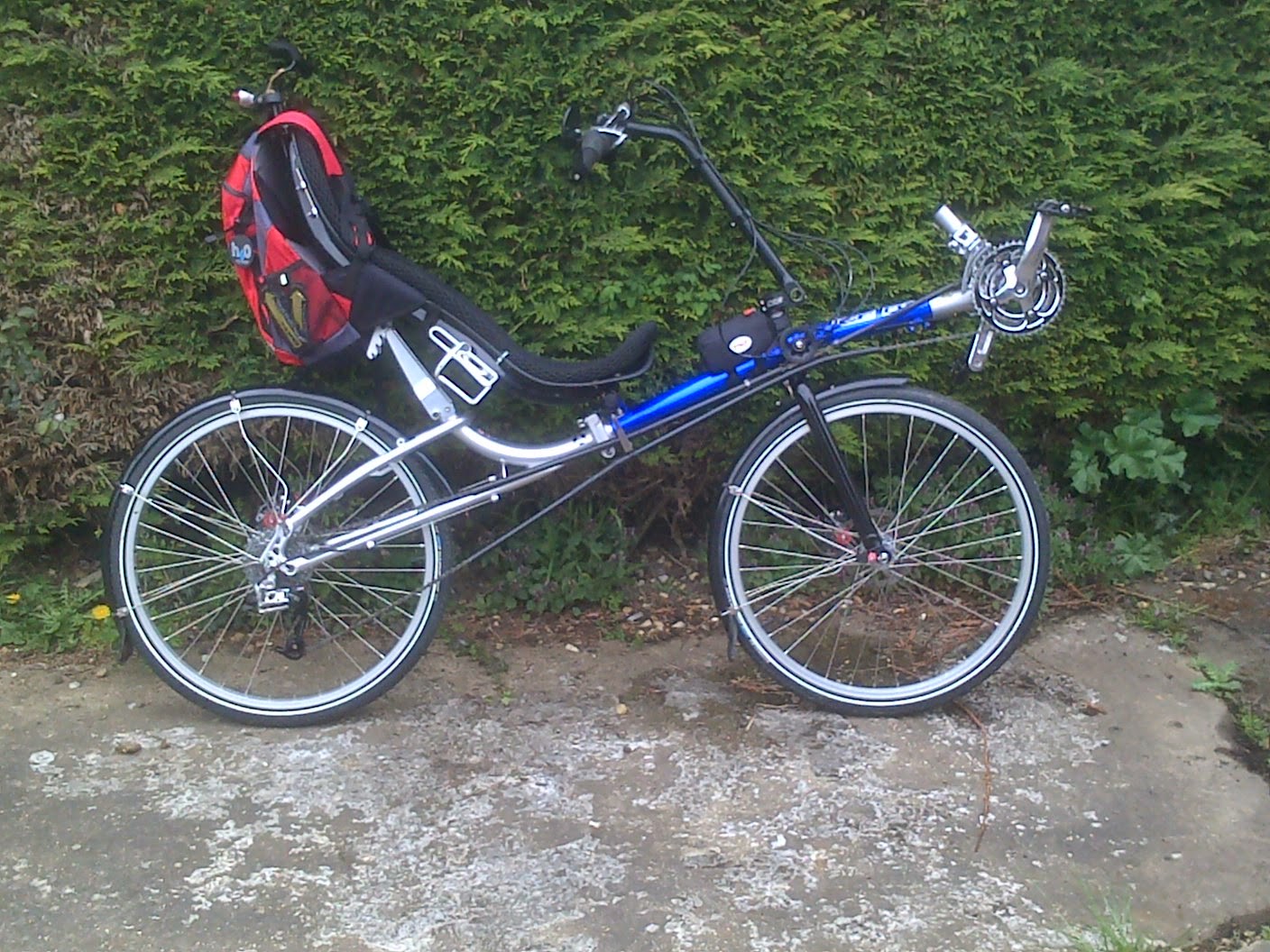 So far I’ve had a couple of 1 hour rides and one of 40miles/2hr 30.  I’m not fast on it yet because it’s under geared for my local conditions, has smaller wheels than ideal, and fatter tyres than ideal.  But as I’m not yet instinctive in riding it, those things tend to be taming the overall package appropriately.

It’s also busy season in the garden of course, and I’ve been busier than usual.  The veggie bed has been transformed with three new raised beds, built and filled by me, now seeded and waiting for the fruits of the earth to emerge and multiply. As I write this, the dwarf french beans are going like the clappers, the beetrooot and chard are starting to emerge and the salads and cucumbers are doing nicely.  The broad beans, tomatoes, chillis, peppers and brocollis are still waiting to emerge as are the leeks and roots, but its still early days and most of April was very dry.

Some of the bonsai have also given me a spectacular early season displays.

In amongst all that I’ve been getting on as usual with a bit of running, cycling, strength training etc.  Since getting the pump I’ve been relearning a bit about how to manage exercise and insulin as it’s not quite the same as on MDI, but as with all these things it’s a case of using the books as a starting point and then experimenting, to get a series of heuristics, or “rules of thumb” that you can apply personally in given circumstances.  So far my experience has been that it is vital to get the basal right and that it can change more than you might expect over a short period of time.

Whether absorption has become more efficient, or whether it’s due to the change to steel rather than Teflon cannulae I don’t know, but I’m now around 20% lower in basal needs than when I started.  My rules of thumb from that starting point are now;

And I can hear you asking, what about racing plans for this year? Please tell us.

So far, not much is the answer, I’ve been in something of a doldrum in running terms, stagnating a bit after last year’s output.  I’d thought about a short ultra (35miles) in May, but psychologically that was not going to happen and training did not even start, let alone progress anywhere. As an example my average run has been around 8km so far this year, and only in April have I gone over 10km, and found that hard going in the wind – a clear example of habituation and specificity.  I have however signed up for a race I’ve had in the plan for a while, the River Ayr Way in September, a nice 44 miler following the River Ayr from source to sea.  That gives me long enough to come up with a plan and to work out the logistics, particularly as the race is on a Saturday and I’m, likely to be flying to Algeria on the following Monday. I also have a hint of a Bob Graham Round working away in my brain at the moment, plus another local looney willing to attempt to.  That would be a serious undertaking, 66 miles in the Cumbrian Fells with 27,000ft of climb in under 24 hours. http://www.bobgrahamclub.org.uk/

Learning point – TBR for a long run/ride probably needs to be nearer 20% to avid those big dips in the middle.
Posted by The Athletic Diabetic at 13:44