Black and White, Yin and Yang, or Sometimes it all goes to Rat Shit


So far it’s been about 6 months since I started on the Insight pump and I’ve put in quite a bit of hard work in learning how to trim the pump to trim the pump for exercise. Learning the timing of run vs bolus, how much to reduced bolus for imminent exercise, use of temp basal in terms of scale and timing of reduction etc and it’s starting to pay dividends, to the point where I can now consistently manage a 10km run or hour bike session on little to no additional carbs, typically 10-20g and I’ve managed one session of an hour and 15 mins on the bike with no carbs at all.

With an eye on the Autumn ultra marathon in the plan, I’ve started to up the length of longer runs looking at getting back to ten miles/16km for now and then building from there.  I have to say though that it’s not always going according to plan.  Overall the legs, feet, musculature, achilles are all still feeling good and I think I’m being more proactive in massage and mobility exercises which will help.  But sometimes despite all that it just doesn’t quite work, and it’s those failure that are sometimes the most valuable learning points.

Take an example of a recent run after lunch.  The lunch was low carb so no bolus taken and the basal was being managed as expected.  Al that done, I set out on the planned 15-16km run intending to keep an easy, steady pace with a low-ish heart rate, but it never felt right.  Worst of all I felt sick, had to stop two or three times at the side of the road and nearly threw up, I really couldn’t stomach the carbs I needed to take onboard.  I did need to stop for the toilet twice – lucky for public toilets, the HR too high, pace too low, and for the first time in over 6 months developed a stitch.  Overall one of the worst runs of my life, and I contemplated finishing it early more than once, but eventually stuck it out to 14km.  Looking back at it there is nothing specific that I can lay my finger on in terms of activities before it, and the only thing I can come back to is eating too heavy a lunch before the run

Contrast with next few weeks where it all went swimmingly, and last week with 5 days consecutive, totalling 32 km run and >160km on the bike split over 5 sessions.  So what was different?  Not really sure, maybe just taking a bit more time to prepare, I probably had a bigger gap between eating and running by just an hour or so, and maybe that made all the difference. More experimenting needed I think

I’m also starting to plan for my holiday where I’ll be taking one of my upright bikes and trying to get at least two decent rides in, so that’s necessitating training in between.  I’m also putting a slightly lower gearing on it as it’s a bit hillier than the wild Fens, although probably not as windy if last week was anything to go by.

I've bought myself copies of the maps for the Bob Graham Round as well, starting to look at the route, with a view to an atttempt about this time, maybe mid June next year, but first I need to make a plan to train/familiarise.

Otherwise, garden is coming on a treat, veggies romping away both outside and in the greenhouse, and the bonsai are also starting to look very good again.  Here’s an example of a maple that I’ve been growing for the best part of 15 years, from a seedling.  The overall shape is about where I want it now, although the left-right balance needs some adjusting and the trunk needs more time to develop a better taper.  Give it another ten years or so and we’ll be getting there. 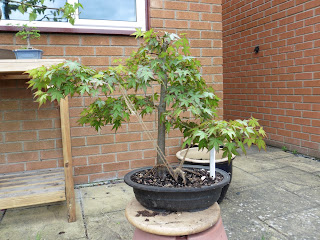 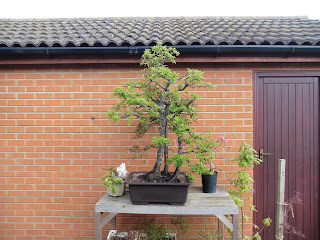 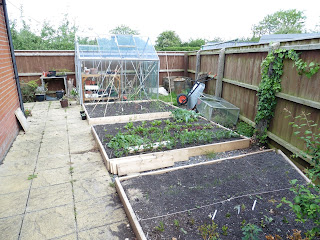 This week has been something of an interesting experience, from a running and diabetes control point of view.  I’ve been offshore on a floating platform, so running on a treadmill which is never the best, but made much more interesting when that treadmill is also moving side to side and back and forward as the vessel moves.  Diabetes control has needed a different mindset around the exercise as the evening meal tends to be early offshore, typically 6pm, which is when I’d normally exercise, so it’s swapped the order of things around.  The strategy I’ve adopted, reasonably successfully is to do a normal basal reduction ahead of the run, and minimal bolus at the meal - a typical reduction by 75%, then run about 30-45 mins later before BG has jumped too high.  As usual test during the exercise and take on carbs appropriately depending on where I started and where I ended up.  Starting at 8.x needed carbs mid run, and ended in the low 4.x, starting at 10.x brought me down to about 5.x with no carbs.

Those of course are all on a treadmill, I'm not going to do laps of the helideck after all.   Today was a mixed on/off road locally and when you take the vagaries of wind and terrain into account, for the same pace the average HR was around 145 over 12km.
Posted by The Athletic Diabetic at 16:34