So who else managed to make a whole weekend out of one day’s race?

My weekend started on the Thursday when I headed up from the flatlands of North Cambridgeshire to the equally wild but much more hilly Kirkby Stephen in Cumbria where my parents live.  The keener eyed among you may have spotted the reference to Thursday there, correct.  I just didn’t fancy two long consecutive drives and of course it gave me the opportunity to hone my taper week and carb loading with a good old pub meal, followed by a pub quiz and then back to my folks’ for a nice single malt nightcap.  Friday morning dawned.

The rest of Friday was not particularly momentous and certainly involved a lot less booze and one important decision.  My parents decided to have a day out and come and watch the race, which meant that I needed to be at Glenbuck for about 8:15 rather than Dam Park for 7am, net result being an extra hour in bed.

Saturday dawned much more brightly than Friday, at least in my mind; it was much greyer out than I’d been expecting, with forecast high teens.  It looked more like 5-6 out there with a wind, low cloud and general greyness.

A couple of eggs on toast for breakfast, starting the race mentally and medically.  This is where I start managing blood glucose with intent.  The insulin pump gets turned down to 30% for the next 3 hours to Glenbuck, then again on arrival for the expected race duration plus 2 hours.  Breakfast bolus was down to the minimum.  All of this to pre-empt the experimentally determined massive BG drop in the first 5km if I don’t, brought on by the combination of increased insulin sensitivity and the switch on of additional glucose transport mechanisms like GLU4 when we exercise. Plus I’ve spent years training the fat metabolism, which you can’t utilise with excess insulin whanging around your system. 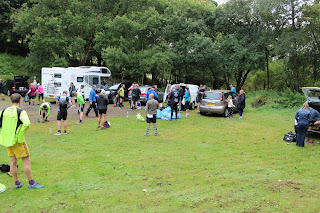 Still grey and nasty on the drive up to Glenbuck, with fog, low cloud, rain, not looking like a nice autumn day at all. Eventually find the carpark, final kit checks, decide to wear the day-glo buff as a beanie to start with, check carbs, water bottle, blood glucose again – high, but where I was expecting it, with a drop to follow soon.  Last minute nervous chatter, trips to the bushes, more chatter, photo calls and then 9am finally arrives in front of the sculpture. 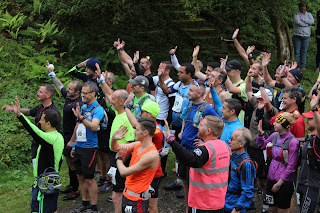 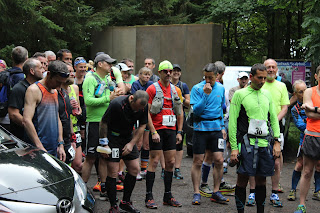 And we’re off.  Having no experience of this race whatever, of this race, I settle down into the train with a couple of markers that appear  to be around my target pace, only they weren’t, they were much quicker than I ought to have been for a 40-miler.  Time for the race plan to kick in, 25 minute run/5 minute walk, absolutely stuck to.  That 5 minutes being used to check blood glucose, eat if necessary to maintain target, take in electrolytes and give the muscles something of a rest.  Long experience tells me that if I don’t enforce it I go out too hard for a sustainable pace over the 40 miles. 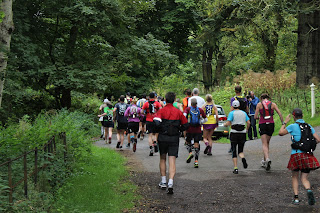 Typically, by experiment I need about 20-25g carbs every 30 mins to maintain stable blood glucose, and was not planning to stop until the second drop box station, so had the pockets of the camelback full of dried bananas, and gels with other stuff in the two drop boxes at the farm and Annbank.  Hydration would be at the water stops, quick gulp every time, and carry a 750 ml bottle of concentrated electrolytes to sip as I went.  All was going well until about 8km in when I started to feel soggy down my left hand side only to find at the next slurp from the bottle, it had a 2” split right down one side.  Enforced strategy revision then; grab a 500ml bottle of water at each stop to keep me going until the drop boxes where I had more electrolyes waiting. 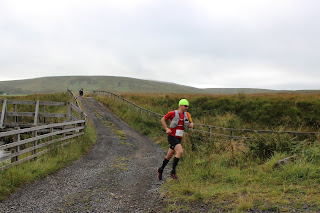 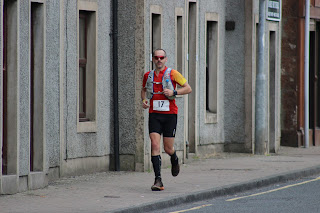 By this time my delusions of grandeur had disappeared and I was back to my 25/5 schedule and about 5:50-6:10/km, just where I should be.

Haugh farm appeared eventually after two minor routing errors, with my first drop box sitting happily waiting for me with a nice lunch of cheese filled bagel, double expresso gel and after dinner mint to go with what I had left in my pockets.  Only trouble was I forgot the electrolyte tabs in my hurry to keep moving.

For me the next section with a lot of road was quite tedious, and my feet were starting to ache a bit to be honest.  I’d expected hard ground, but the gravel path with the 1” stones was particularly hard on the feet.  Everything else was feeling good by this point though and pace was still going well, swapping places with two or three other runners every time I went through the run/walk cycle.  I made absolutely no attempt to run up those nasty little short sharp climbs with energy conservation in the latter stages being more important than pace.

Annbank arrived a lot earlier than expected and I was definitely psychologically lifted when I was told that it was only about 8 miles to go as my left hip and knee (mainly ITB) were starting to play up, but with less than 14km to go, there was no way I was stopping.  Restock and off again, but this time unable to keep to 25run/5 walk, it was down to closer to parity, with more walking creeping in and the pace drifting the wrong way.  Mental calculation telling me that the 6hr 30 mark was gone, but 6hr 45 was still a possible, and sub-7 was an absolute cert unless I had a complete meltdown.

This is where the race becomes mental for me, not physical, forcing the now protesting knee to keep running for an extra 45-30-now 15 seconds at a time until I’d got to 2min on/2 mins off.  One last routing error at the bypass had me sandwiched between two runners I’d passed around the 40-45km mark, and that’s where it stayed to the end with the 300 yards of the stadium separating one from the other over a distance of 62.9km for me in 6hr 51 mins. 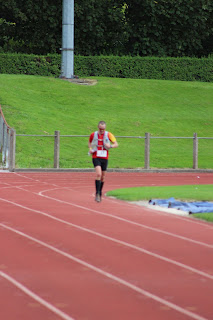 I was absolutely chuffed at that given the knee troubles and the routing errors, as it was over an hour quicker than my previous 40 miler PB and the RAW was a tougher course to me. 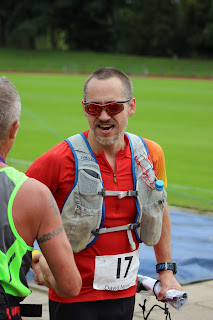 just 300 yards between us after nearly 40 miles

Assessing the damage two days later, calves OK, Achilles OK, quads knowing they’ve been in a race, shoulders tight, but unlike previous endeavours walking is not an issue, blister on my left big toes that I didn’t feel during the race. Last time I was struggling with stairs for a week afterwards, so something went right in the training and conditioning this year.  Only thing complaining is my big toe joints.

For some reason my cannula for the insulin delivery was giving me grief all through the race as well, kept catching a nerve or something with sharp pains in the area if I twisted or moved wrongly.  I’d had a cuple of twinges the day before but decided not t change it.  It got so bad that I almost stopped and replaced it mid race with the spare in my bag, but oddly enough it stopped hurting later in the race.  When I looked at it in the shower, the cannula was full of blood and it was quite sore and bruised for a few days.

Only fly in the ointment was Sunday evening after driving home, I was pressing some apples and pears (juice now fermenting nicely) when I managed to drop a 5kg weight disc on my left big toe joint.

Post race, meter recharged, 6.4 an hour later and a 40g snack with 0.5 units insulin (50% of normal, as I know by experience that several hours later my BG can drop rapidly).  Instead I let it go higher (but not intentionaly as high as the 13.7 this time, and adjust downwards), but still by bedtime I was needing to take a couple of snacks to stop dropping into hypo territory.

Posted by The Athletic Diabetic at 06:46