The opening line from 1984, if you’ve not read it yet, go and get an education on the dangers of a lack of effective democracy; and then go and read Brave New World by Aldous Huxley and WE by Yevgeniy Zamyatin.  Three different takes on the same idea.

Anyway, I digress.  Last Saturday, 6th April I’d entered another audax in support of the organiser who I routinely meet on other events in the locale and was organising for the first time.  Why not, I thought, typical 100km audaxes are about £7 wherever they are, I’ve not done this one before and it fits in my plan of an audax a month as part of my recovery efforts.

So, 6th April 2019 dawned not dissimilarly to 1984, bright-ish, cold-ish, but with an improving forecast, so I threw caution to the wind and opted for the MTB shorts with the separate padded liner, longer socks, and a merino baselayer under a SS jersey.  Not being entirely full of carefree abandon, I took arm- and knee-warmers and a light waterproof/windproof, all just in case.

As usual, the Saturday morning trains were useless beyond Cambridge or heading east into the wilds of Suffolk, so it was a case of chuck it all in the car on Friday night, substantial breakfast Saturday morning (involving eggs, avocados, fresh Swedish rye bread from that week’s trip – yum!) and then head off to Bury Ste Edmunds and down to HQ at Long Melford.  Long Melford is a pretty little town/large village in Suffolk that I’ve ridden through many times without paying it much attention other than as a navigation point on the journey. It seems to have quite a bit to offer as a tourist destination with a couple of large country house estates and National Trust places plus cafes etc.

As per pretty much every audax I’ve done, the HQ folks were bouncy and full of friendliness, apologising for the weather while pressing cups of coffee and fresh toast or biscuits into your hands as they scurried around getting ready to set off the earlier 160km riders.  Now, at this point in my recovery 160km is in the far distance as an objective for the summer with the Ride of the Falling Rain on Islay.   I was set for the relatively trivial distance of 106km for the day. 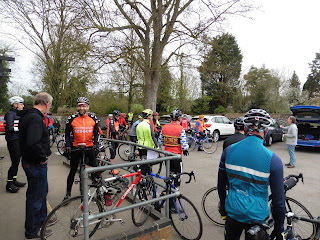 The Keen Lads - Setting off for the 160km 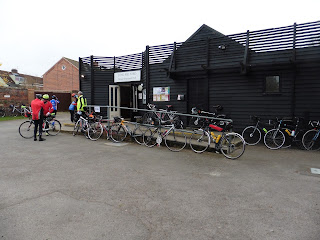 The Calm After the Storm
By the time we were ready to set off, nothing had improved at all in weather terms, so I donned the waterproof as my knees are fairly robust and my top half would soon be toasty warm, and probably a bit overwarm soon after starting.  The start was managed for the benefit of the photographer from the local rag, so if you spot me at the front of the bunch, never mind, I was there for all of 15km before getting passed by what I assume is a husband and wife pair I‘ve seen before and seem t be consistently fast.

As with most things audax, there’s an ebb and flow on the road, with bunches appearing, breaking up and reforming, and so I ended up as we left Suffolk, into the spiky short, sharp hills of Essex, amongst a bunch of about ten riders at similar speed.  Interestingly you could see a microcosm of a pro-peloton as the lighter of us accelerated up the hills only to be reeled back in on the flats as the bunch settled into a rythym.   Donning the waterproof had been a good idea as there was a steady drizzle, and instead of warming up, the temperature seemed stuck around 5-6C, just about the lower limit of shorts-wearing, but as predicted pretty hot and sweaty on top. 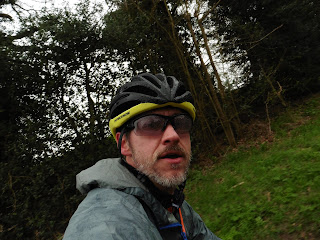 The first info control was rearing it’s ugly head at 35km, pretty simple you’d think “what’s the colour of the co-op sign in the village?”.  Let’s just say there seems to be a degree of audaxer colour blindness, with options ranging from black to green to blue, or did they mean the lettering, which was gold?  A lesson in effective info controls perhaps?  Maybe something like “what’s the name of the church opposite the co-op?” would be less ambiguous? 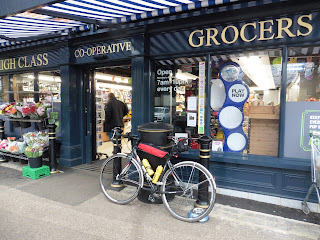 This is where the bunch broke up for me, as I stopped for a quick pastry and blood glucose test, no worries there.  Normally I’d stop earlier than 35km, around 25 typically, but lately I’ve been working out how far I can go on a single charge with a degree of confidence, and I’m finding that a bit of extra breakfast can take me far enough for these controls around 1/3 distance with no worries.  Only saves me a couple of minutes, but riding in a bunch a bit longer can be nice at times.

Unfortunately, it was only going in one direction from there onwards.

About 45km, my lower back started hurting, getting progressively worse, and then the hips/pelvis joined in in sympathy for extra fun. By about 55km, I was thinking about getting back to the HQ and calling it a day, the feeling growing as I rode on. The day was getting no better, even though the rain had stopped by now, but it remained overcast, grey and cold.  There was a breeze for sure, but nothing compared to the Fens, or the winds on the Pork Pie 100km a few weeks earlier.

Back at the HQ, with thoughts of coffee and cake, I told Ian I was packing.
“really, but you’re making such good time” was the reply “why not have a cup of coffee, warm up a bit and then decide”.  I agreed, knowing full well that my mind was made up. Only another 35km to go, and I knew I COULD complete, the question was whether I SHOULD, knowing that if I did so, I’d be nursing my back for the rest of the week.  Coffee, ham sandwich and malt loaf aided the cogitation, with a confirmatory call home and I handed in my brevet and called it a day.
Total 65km in about 2hr 33 at an average of 25.1kmh.  All good, and there will be plenty more rides to go. I might even come back for this one next time round as it would be a great ride under better conditions.

Looking back, it had been a busy week, which I think may have been a contributory factor.

Perhaps a bit too much at this stage of the recovery, perhaps just the additional travel and being sat down, perhaps just one of those things. In any case, I think I’d have stood a better chance of completion on a recumbent, so I’ve started taking steps to repair it even without the police decision and the lawyers chasing the insurance of the drive that hit me.  I just need to get it done.
Posted by The Athletic Diabetic at 20:18