This week was always going to be difficult to get much running in, but it was also going to be potentially some superb running locations. 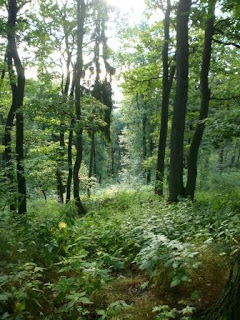 I was off to the , a place called Chomutov, about an hour of , and the hotel chosen was nestling in thick forest on what looked from the satellite map to be some pretty decent hills as well.  I’m not really one for hills, living as I do in the flattest part of the , but I do give them my best shot when I come across them, so I was looking forward to running in a very different setting from the one I’m used to.
The only thing was the work.  This week we were piggy backing on one of the client’s internal assessments where they send people from around their organisation to assess the site against their own internal standard at the same time as we assess them against ISO 14001 and OHSAS 18001.  That makes for a very busy week normally with little time other than for the work.
The plan was to arrive Monday evening, have dinner with the team and then get a morning run in.  It didn’t quite work out like that however as the flight leaving Heathrow for Frankfurt was late which means my colleague and I missed the connection for Prague resulting in a 4 hour wait there and arrival at the hotel at 1:15AM Tuesday, by which time I was way past sleepiness and didn’t get to sleep after unpacking until about 2AM, then woke again about 4 before finally getting a bit of sleep.  Not surprisingly I didn’t get out of bed at 5:45 to run.  I did run in the evening though, plan was 5 miles or so.  Started downhill through the trees, pretty steep, then cut off left onto another trail running fairly level through the trees and, not really surprising when you think of where you are, past several WWII blockhouses.  Ran about a mile down there and turned around, and took a different trail back, again level-ish, but I knew I had to climb back up at some point.  When it came it was nasty, not runnable. By then I was fairly well done in with the travel tiredness as well and ran a bit more on the hotel access road before turning round and heading back to do just under 4 miles for the session, OK in the circumstances, but not good.
Total 3.89mi / 33:42 / 8:48 / AHR 159 / cad 87
1) 8:27 / A158
2) 0.24mi / 2:01 / A 8:30 / AHR 153  - accidentally pressed the lap button
3) 1.0 / 8:02 / A160
4) 1.0 / 10:12 / AHR 167  - yes, this was the uphill mile
5) 0.59mi / 4:59 / 8:26 / AHR 151
Wednesday morning I was woke at about 2am by dogs barking somewhere and then abut 4am by continuous rolls of thunder which quickly turned into an almighty storm, with the rain keeping me awake for much of the night, so no morning run again, and the evening was taken up by dinner with the clients. Thursday morning, lashing it down and wind shaking the trees again, so I only managed to get the one run in those great forests.
Thursday evening, back to the Prague Marriott for a flight the next morning, typical Marriott gym, set in a glass box with some fairly ropey equipment.  Managed to find the tail end of the TdF stage on Eurosport and set off on a 6 mile tempo run at target HM pace, with mile warm up and cool down.
Total 8.0mi / 1:03:09 / 7:54 / AHR 151 / MHR 172 / cad 91
1) 8:37 / AHR 128
2) 6.0mi / 45:59 / 7:39 / AHR 155 / 94
3) 8:32 / AHR 153
Getting very sweaty by the end of that. Drank far too much that evening with my colleague and one of the client team who was flying back to Ireland on the Friday, so no desire to run on Friday morning, and by the tiem I’d got home, no desire to run on Friday evening either.
Saturday, was huarache day.  Made a pair for me from the new ribbed sole material I bought, which I then used to run into town to the library to pick up my reserved copy of Anita Bean’s Sport Nutrition book, and then shopping with the family.  Stopped at a road crossing, baulked by the traffic, same as a pair of cyclists.  Nodded hello as you do, then one of them looks down at my feet
“are you running in those?” [huaraches]
“yeah, if I was only on tarmac, I’d be barefoot, but I’ve come down the lanes”
“blimey, that’s hardcore, oy [FRED, his mate] have a look at what this blokes running in”
A short explanation ensued regarding my reduction in injury time since going BF.  They made sure they started behind me just so they could verify that I was indeed running.
After lunch, I made the second pair, for my daughter Serena, complete with bright orange laces.  I’ve found the perfect material for them, paracord at about 5-7 pence per foot depending on colour scheme.  She then wore them for the rest of the day. 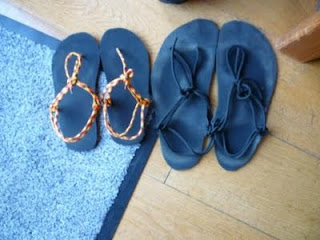 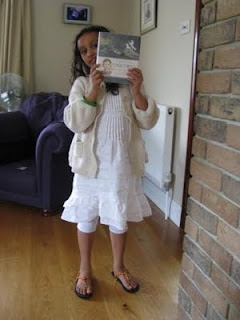 A bashful Serena and the little and large huaraches
Posted by The Athletic Diabetic at 06:50