Having never run a HM before, I've been thinking about strategy for both pacing and hydration.  One thing I've used before for indoor rowing is a negative split strategy, but I think I've only used it as far as 10km, then there is the strategy I use for a 10 mile TT on the bike, which is eyeballs out all the way, just trying to keep the HR where I can hang on.


So start slower than target pace and really wind it up at the end.  The other thing  was thinking was to try a run/walk strategy.  I know I tend to blast out of the blocks (relative terms) at the start of the race, which for 10km is not really a problem, but over 13 miles is likely to have me blowing out of my arse before the end, so an alternative I've been thinking about is a run/walk strategy reasoning that it would give me a targetted rest, take away my tendency to charge onwards regardless and give me a chance to drink.  The plan for Sunday was to be run 4 miles, then walk 1 minute, then run until the next 4 mile point, walk 1 minute etc

So that's what I tried on Sunday, also bringing in the variable of running with something in my hand.  As I was planning on being out for two hours, I reasoned that it was OK to have one bottle of NUUN in my waistpack and one of Bikefood carb drink in my hand.  I picked the Bikefood bottles as well as they have a built in handgrip area, and I was pleasantly surprised at how easy it actually was to hold it, with not a high level of grip required 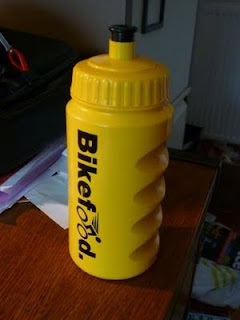 So, 14 miles the plan was for a short walk every 4 miles, thr route was from my village, down to the railway station in Ely, up along the riverside path to the next town, Queen Adelaide, carry on along the river to Littleport, then home adjusting the mileage and route as necessary.

First 4 miles down to the station was uneventful as expected, apart from my standard tendency to go out too hard.  Theoretically my steady pace should be slower than 8:30 min/mile, nearer 9:00, but I find it really hard to run slower than 8:20s, it just feels unnatural and disjointed.

Turn up along the river, first mile of that along the built up part past the marina and restaurants and out onto the meadows.  They've put in a decent path here, hard packed clay/gravel and nice and level, so it would be good for families, and we'd even me able to get my son down here in the multi terrain pushchair.  No photos this time, but I did see some amazing dragonflies, as long as my hand.  I also said hello to a couple of cows, but they just looked dumb at me with their big brown eyes.

Once you got north of QA, the path was unmade, just a track through the grass on top of the river bank/levee arrangement.  It started off as a clearly marked, but uneven path with longer grass, weeds, thistles, brambles etc either side that were just waiting to grab and slash at my legs.

No photo, but the first thing that Serena (7) said when I got home was "ooh daddy, look at your legs, blood!".  She is only seven after all, and has a tendency to over dramatise, but yes, my legs were a bit of a mess.  I think I need a pair of those compression sleeve lower leg protection thingies.  Hmm, maybe this could be my first opportunity to become a swag ninja!

Anyway, the footpath soon deteriorated to the point where it was a barely marked trail through knee high grass and weeds along the top of the levee, requiring all my concentration.  And that's when disaster nearly struck.  Teh path came down off the bank to get around a drainage ditch with a left then right kink and back up again.  At the left turn, the ground dropped away to the right, and as I put my foot down, the ankle rolled over.  Oh sh!t, right ankle screwed again, I thought.  This one has historic rugby related problems.  Even more important was the fact that I was only 7 miles into the run on a big loop, so it could be a long way home again.  After that initial shock though, it soon settled down again with no lingering pain, so disaster averted.

Then, less than half a mile later, I went over on the left, this time hearing a distinct click as I did so. I really thought I'd screwed that one badly.  I carried on though, with adrenaline and a dull ache, and as I got closer to the next town, a better path, broader and with nicely mown grass.  The only problem now was that people's houses were backing onto the river, and they'd appropriated bits of  the riverbank and footpath for their gardens.  I refrained from hurdling their fences, using the gates instead.

Ten miles up by now, and within sight of home.  The last four miles were largely back onto tarmac, but even so, I was quite surprised to look down at the Garmin and see 8:05 min/mile for a steady run with HR in the mid 150s.

Monday - planned rest day, left ankle quite sore
Today, Tuesday - had thought about half an hour barefoot, but on waking, left ankle still a bit tender, so may go out at lunchtime, or a bit of erging.

So what did I learn on Sunday?
1) I can run a half marathon, hell I can go further than that
2) Pacing startegy works, and should be good for an ultra with the right walk/run ratio
3) It's not a good idea to screw with your ankles three weeks before a race.

For those who are that way inclined, data and Garmin Geek trace
http://connect.garmin.com/activity/101306313