A bit of Cycling in Majorca, and Round One to Bob (Graham)

Blimey, time flies yet again, but much has been done since last time.


At the beginning of July I went to Majorca on holiday with wife and daughter and took the advantage to take in a bit of cycling at the same time, so the lead up to that was to get out on the road bike again.  That meant a few rides of 2-3 hours getting used to the handling again as it’s quite a lot different to either the recumbent or mountain bike which I’d been riding since about March.  One of those rides led to the now infamous bee incident which has caused much hilarity amongst family and colleagues.  Riding back up the road into the village after about 75km or riding, with no more that 2km to go, I spotted a haze across the road. On closer inspection, at 20mph, it turned into a swarm of bees.  Now if there’s one thing not to underestimate it’s the impact of a swarm of bees on human flesh at 20mph, and then you have the fact that after having ridden through the swarm, you now have about 2-dozen pissed off bees clinging to your shoes, socks, shorts and jersey, and the little buggers have stings.  I think I took about three stings on one leg before I managed to flap them all off of me, but not without veering over the road almost into the path of a van.  Who knows what he thought when he saw an apparently demented idiot of a cyclist coming towards him waving his arms about.


My leg was swollen for about a week. 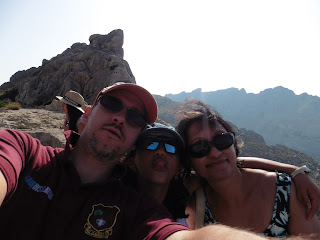 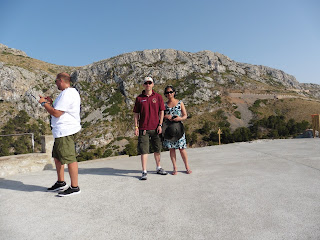 On holiday itself, I managed to get some decent rides in, up into the mountains and coasts of North Eastern Majorca.  Three longs rides of 70, 100 and 120km and a short 20km test ride after I’d rebuilt the bike.  All involving a decent amount of climbing and some fun descents, with a new max speed on the bike of about 60km/h (about 38mph).  One thing underestimated was the heat, having left the UK in the middle of a heat wave it was over 40C in Majorca when we arrived, luckily abating to the mid-30s later in the week, but still needing to be on the road by about 7:30 to avoid the heat of the day. 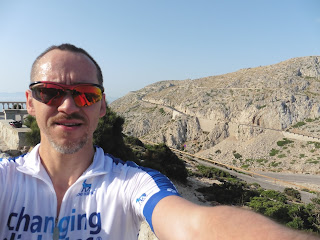 At Cap Formentor, I'd just come down that road 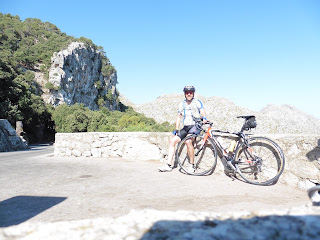 Near Lluc, taking a break before the descent﻿


All were done with a fairly consistent 30g/hr of carbs with good BG control.  Typical reduced bolus at breakfast to let the BG rise a bit, especially as the reduced basal would not have kicked in by then having only 90 mins from waking to riding.  Typical 30% TBR used as normal.  As an example, the 98km ride, perhaps the most challenging with a decent amount of climb in it went like this; - 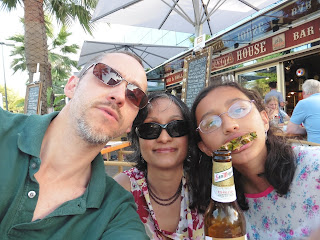 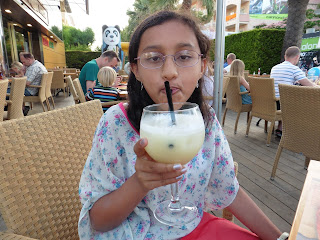 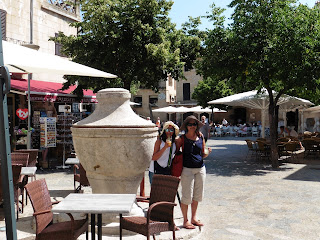 miscellaneous holiday-ness
Since then it’s been a bit manic to be honest with two weeks off and then straight back into an offshore trip, and with another one planned today that’s my 5th this year, and no diabetes issues at all so far.  In fact at my recent pump review, and recent offshore medical the main remark was how healthy I was, still that didn’t stop one client in Algeria declaring me PNG because I’m T1. TBH I’m not that fussed as it’s not the most glamorous of assignments in any case.


The other thing going on at the moment is planning for a Bob Graham Round attempt in June 2016, that’s 42 peaks and 65 miles in the Cumbrian fells in 24 hours.  I have the maps and have the route fully plotted on paper, but of course that’s nowhere near sufficient for an undertaking like this.


So last weekend, after having been working up in Lancashire and Cumbria I headed to my parents in Kirkby Stephen on the Friday, ready to do an on-the-ground recce of sections 1 and 2 of the BGR.  The plan was to start at 8am at the Moot Hall Keswick on Saturday, do the first leg of Keswick-Skiddaw-Great Calva-Blencathra-Threlkeld in about 4 hours, meet my parents in the camper van at the pub car park, restock and set off for the second leg along the ridge to Helvellyn and then Dunmail before heading round to Honister to meet a mate from my village who was attempting a full round, and cheer him on a bit.


First things first though, a cannula change before setting off as the one I inserted on Thursday was catching a nerve, last thing I need is pain from that while running 25 miles.


Let’s just say that was a valuable learning experience.  Probably 3 important lessons there
1)      Nav is key.  This section is going to be difficult at night with little in the way of routing clues and quite a bit of open fell to cover at night with almost no running possible.  Overall three detours cost me an hour, so while my pace was good while moving, going anywhere off route has a punishing effect on the overall schedule even if moving well. Looking at my Garmin trace I spent far too long stationary as well, reading maps, but that’s the point of a recce.
2)      Nav point number 2 – I lost my compass somewhere between Great Calva and Mungrisdale Common, my own stupid fucking fault as I forgot to tie it to my pack
3)      Nutrition - I need to stop carrying too much food, BG control was good even at 5km tests rather than half hour, eating typically 25g/hr on the move but supplemented either end. I basically need to get over the fear of hypos and only carry what’s needed plus a bit of spare. It wont lighten the load much, but is less bulky. During the 5 hours I was out there I ate a few dried bananas, dates and 2 gels.
4)      I will definitely need a new head torch


Overall it took me 5 hours to complete what I was planning in 4.  The main cause being three detours between Great Calva and Threlkeld.  The first when I took the wrong route down off Great calva adding 4km to the route to the river crossing, then another km lost over Mungrisdale common and the final km added by a routing error into Threlkeld.  Should have been 12.25m/20km in total, but I ended up doing 17m/27km on that section, and that 7km cost me that extra hour.

By that time I was so thoroughly pissed off with it that I called it a day and had lunch with my parents, went into Keswick to replace my compass and then off to meet my mate.  Turned out he had his own disaster as his support crew was 75 mins late to the second checkpoint and then he had a really tough third leg and stopped there.  We were waiting at the end of the fourth leg.


No bones about it, this will be a tough challenge.


River Ayr Way race coming up in Sept though, but no opportunity to recce that one.  42-ish miles, to be used as prep for the BGR.

Posted by The Athletic Diabetic at 23:36