Cruzbike 4 - the final build, and learning to ride it


So here's my final spec

Controls
- Dura-Ace bar end shifters - Indexed on the RD, friction on the FD
- Brake levers are TRP RRL SR - brown hoods and drilled Al levers, with a nifty little button to slacken off when you need to remove a wheel
- tape is a nice Fizik orange to match the hoods and the orange accents on the frame
- cables - all Shimano except the rear brake which was from a cheaper DIY store - for the length
- outers - Clarke - I bought big reels in the sale - enough to last a lifetime, but only in black
- Brakes - a very old set of Tektro 521's with salmon KoolStop pads – this will be the first upgrade to give me a bit more reach.

Wheels/Hubs
- rear - Exal LX rim with shimano dynohub, disc capable
- front - stock Shimano R500
- Tyres - 28mm Conti GP 4 Seasons - now my standard all year round tyre
- Pedals - Shimano SPD compatible mounted after about 50km.
- Mudguards are SKS raceblades, with an SKS MTB downtube mudguard bolted to that threaded insert under the frame and an MTB fork crown neoprene thing to protect the rear frame.
The two things that gave me the biggest PITA factors of the build were 1) mudguards as always, but doubly more so being a back to front recumbent with no mudguard eyes at front and 2) the rear brake
A bit of time fiddling with cockpit set up as below

Also equipped with a rack for touring, panniers and radical banananananananananana bags as necessary. The Carradice Carradura rack bag is enough for Audax and day rides. 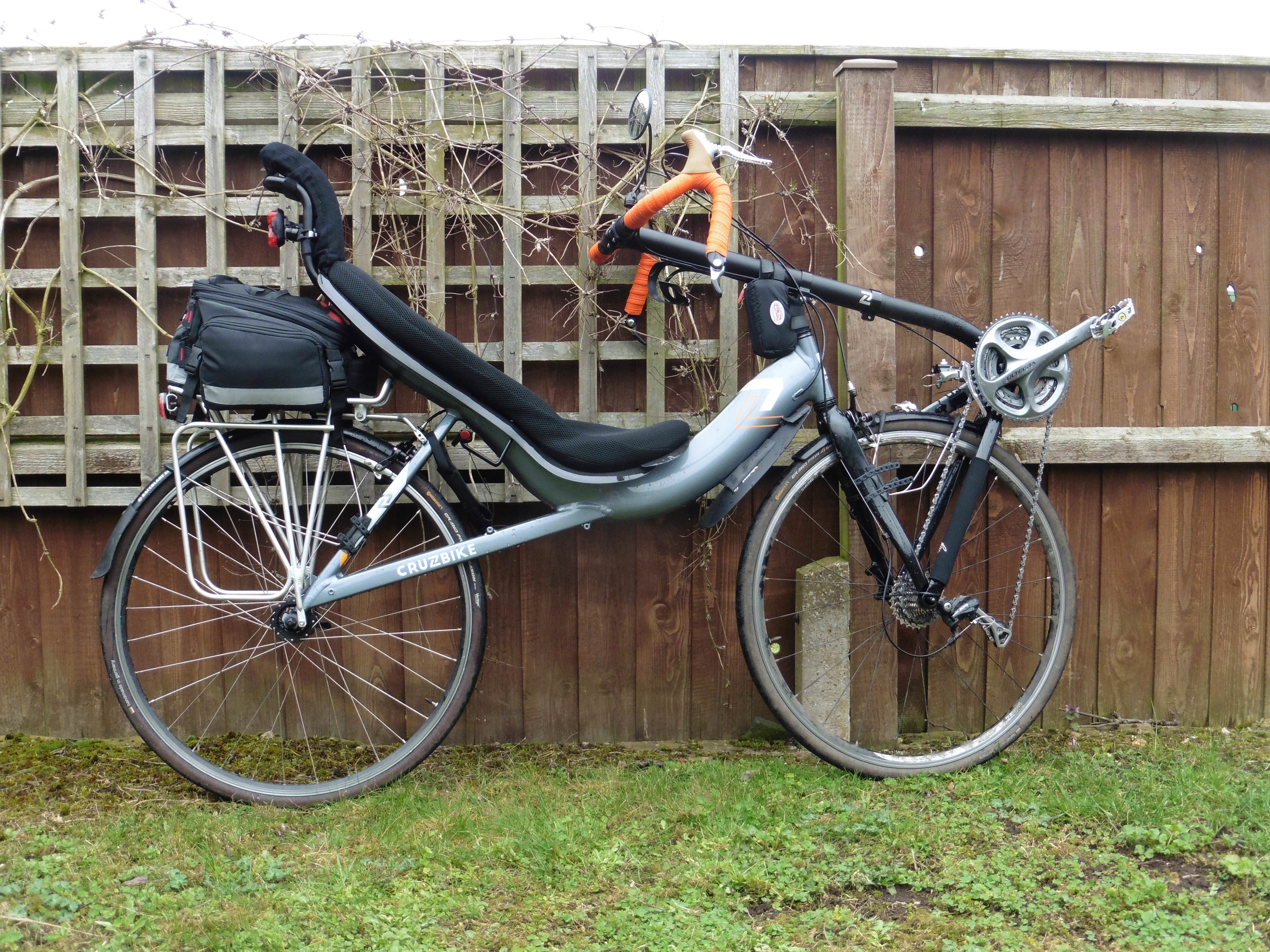 You can follow the overall build progress here
https://cruzbike.com/forum/threads/s40-build.12226/

And on to Learning to Ride

14th March
Oh man! How much fun is that!

I didn't do the carpark drills, flintstoning, roll downs etc. I'd intended to, but wanted to get a feel for the handling first. In the event, 3 failed wobbling starts and I'd got the hang of the initial pedal steer on start up, or at least enough to get going. About 1km down a quiet single track lane, wobble, wobble, wobble. Think - relax, relax, relax and the correction of the pedal steer becomes more instinctive rather than a fight. Visibility is great and the ride is nice and smooth.

I've a feeling this will be a very comfortable audax bike. Plan tomorrow is a quick 10-15km depending how I get carried away or not. I will do some handling drills as well though, I think it may be a while before I'm comfortable enough to try drinking on the move.

Now the training starts for the summer tour.

Damn, this thing is fast! Hit 36km/h with a following breeze in the middle ring, with flat pedals and a boom a touch too long. Too long boom meant that my feet were floating around on the pedals and back of one knee was uncomfortable. Moved that back in by one notch when I got home. Overall was 10km at 27km/h, average HR 141.

Noted a couple of things to take care of, including retightening the brake lever anchor bolts and sorting out how to make the radical tail bag sit right without fouling the rear mudguard.

Did some practice starts as well. Overall the learning curve is quicker than either my first recumbent or the M5, so far. I'm not sure how quick I'll be to change to clipless pedals, but audax in April?

19th, 21st, 23rd & 24th March Turbo trainer sessions on either Taxc RLVs or easy/steady sessions learning to spin.  Tedious, but the weather in March in the UK was appalling, low light levels and my busiest period at work

25th March
Having been stuck on the trainer all week due to crappy weather and pressure of work, I finally got out on the S40 today

That's with 100km under my belt, mostly on the indoor trainer, in Audax set-up. That was with a very high cadence, deliberately undergearing to help manage my wobbles as the lower gear = lower pedal pressure = less wobble. Still had a few moments of wobble, correct, wobble, over correct, head towards the ditch etc.   The S40 is much less aero than the M5, but seems much easier to get the power out.   On that loop, my audax DF with full mudguards, rack and rackbag seems to have been the faster of all three bikes so far.

I can't work out why the M5 is so slow - seat angle is about 25degrees, similar to the V20, it's heavier, but so slippery I smoke DFs on any downhill without even pedalling. I've done a very quick audax on it but on that loop it doesn't seem to work well. I think the DF time was set in quite strong wind conditions and it seems that the DF gains more downwind than the recumbent gains upwind or crosswind.

I'm pleased with the S40 though, so early in the learning curve, much more to come from there I think.   Also followed this with 15 mins of car park drills, very worthwhile and will be repeated. Right hand turns proving harder than left hand turns.

Update to build, added cable ties around the base of the front triangle to keep things together while changing wheels/repairing punctures etc

31st March – Turbo session
25th-30th was full-on 12hr plus days at work, 7/7.  Next chance to get on the bike was therefore 31st March, and guess what, rain all day.  Now I’m no fair weather audaxer, but I don’t see the point of going out in the rain just to prove a point. It if starts raining while I’m out, that’s a different matter altogether and you just cope.

So, instead, 90 mins on the turbo trainer. Tacx RLV, Pacific Coast Highway.  Found the need to use the full range of gears, inc the 30x25 (I have a 28 on the road cassette so a bit extra in the bag), I think partly because of not being able to use the upper body as effectively with the front end corralled.

One thing I did learn though was that the seat base was not quite adjusted to my tastes. With my experience of the m5, I tend to start off upright and then drift downwards/forwards.  The seat pan was about midway forward and just not quite supporting the glutes, so causing quite a case or recumbutt.  That’s now been extended all the way forwards.

I now also have a much better idea of how I’m going to fit the dynamo lighting set up and the USB-werk, need a little more speaker wire for it, none in my spares box and the DIY shop was out.  My reflective tape and frame protection “helicopter” tape arrived in the post, a very useful £10 purchase from E-bay.  The plan is to attach the dynamo cabling to the frame with the heli-tape rather than cable ties everywhere.

Sunday 1st April
Fittingly, the 100th anniversary of the Royal Air Force, my dad served 28 years, my uncle just as long and several cousins.  I almost joined but ended up in engineering in industry instead.

The weather dawned atrocious, overcast, drizzly/showers, but what the heck, I’m getting out anyway. Time to give this thing a touring comfort test as well, picking one of the roads I typically wouldn’t ride because it has cracks across the width of the road for the entire length, perhaps every 30-50 yards.  I think this is where a lot of roads around here were originally laid as concrete slabs and then covered in tarmac. As everything settles then the cracks open up and cheap repairs etc. On the M5 this is spine jarring and on a roadbike wrist and neck jarring.

28mm tyres on the S40, yes you feel every bump, but its bearable.  There seems to be a lot more frame flex in the S40 Al frame vs the Chro-mo M5 with massive rear stays. The more upright touring position also gives much better visibility of the upcoming potholes.

The weather was actually much worse than I was expecting, damp, showers, temps down to about 4C and a biting NW wind.  The loop was out in a northerly direction, and then a long drag back to the south/south east before heading back west and a short NW leg back home.  Route was mostly rural on some nice small generally traffic free roads, but in some cases too narrow for passing.

First challenge came early on, as the main road took a sharp left across a bridge, but I wanted to take a “right” on the top of the approach road to stay on the same side of the river.  Of course as I approached it, two cars from my left necessitated a stop (right turns crossing traffic in the UK) resulting in an uphill RH turn from stationary on a greasy road.  My first experience of front wheel slip, such fun!

The rest of the ride was much less fractious by comparison, including a couple of right hand turns.  I think me and the bike are coming to an agreement now.  It’s no longer a clash of those two 80’s wrestling heavyweights Mick McManus and The Bomber Pat Roach, now more of a couple of schoolboys tussling in the playground, neither quite strong enough to land the final blow.

Still not ready yet to drink on the move, and my next long ride will involve a hydration bladder and tube clipped to the headrest tube.  Hand signals, adjusting the mirror etc all OK right now, but that’s as far as it goes.

Overall impressions, 230km in so far, about 100km of that on the road.

I'd been riding an ICE B2 for a year, twin 26"/700c wheels, big and heavy and an ideal trainer. By comparison the M5 out of the box was almost unrideable. Restricted seat positioning meant I had to cut the boom - still needs a bit more taken off it as I want to shift the seat by about 50mm to improve the vision further. With a very reclined angle, and that long tiller the steering took quite a bit of getting used to as is quite twitchy. Low speed handling was very challenging to start with, but at speed downhill and in a straight line it's like it’s on rails.   I'd say it took me a good year/1500km on it to feel really comfortable, and I had a "aha" moment in slow heavy traffic one day when I suddenly realised I was doing OK with it.

First impressions on the S40 are that I'm finding the transition much easier right now.  Perhaps 3 years of riding 'bents, perhaps the slightly more upright position.  Would I recommend an S40 recumbent as a first recumbent for learning, perhaps not.  I think the mastery of both MBB and recumbent balance together could be a bit too much.  A T50 by comparison, one less thing for the hands to deal with, more upright and feet easier to get down, perhaps more rigidity in the frame similar to a stick bike, perhaps I need to ride one some day.
Posted by The Athletic Diabetic at 22:22