Needs Must When The Devil Drives Part 2

Day 4 - Monday – Islay to the Mainland, then Ardrossan to Newton Stewart

This was always going to be a tough day, starting with an 0500 alarm, pick up my wonderful packed breakfast (to be eaten as lunch and snacks on the road) ready to ride back out the low road to Port Ellen and the 0700 ferry.  A very uneventful ride with only two cars on the road, and a bit of humour as I negotiated my way past a flock of sheep on the road by the airport, several audaxers would either have approved, or perhaps ejected the three sheep that were sheltering in the bus stop.

Arran, from the ferry, this is what I was soon to be riding through 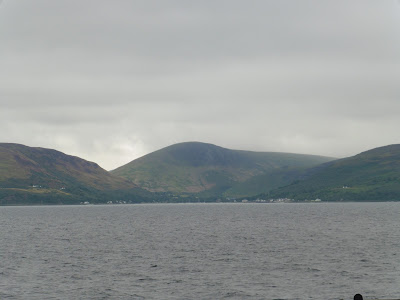 No dramas on the ferry, and I enjoyed the excellent CalMac full breakfast.  This time no dramas on the ferries either, getting across the MOK and Arran without any stops, allowing me to keep to schedule on the ferries, getting back to Ardrossan for 1:30pm.  The next leg was going to be the tough one, down the coast for about 45km and then up and over the Galloway Forest Park with a hopefully fast downhill last 30km or so into Newton Stewart, 115km for this leg.  Profile below

Let’s just say I wouldn’t follow that route again down the west coast, or over those hills after having the first 50km in my legs for that day and with 15kg of touring luggage.

The first part was simply a farce, following a National Cycle Network (NCN).  My comments on another forum were less than complementary.  NCN should more correctly stand for National Cycle Numpties.  In this case the route between Ardrossan and Troon wsa a shambles.  Who in their right mind would direct a bike path on the strand? Fair enough on the road next to the strand, but fuck me how monomaniac do you need to be in your mission to try and keep a cycle path off road? There's me, a tourer trying to keep some semblance of progress amidst various ice cream eaters, dog emptiers, multi generational family outings and sand castle builders etc. And then in Ayr, the routing was turn left off the road, along the river, cross the footbridge, over the other side go back on yourself and cross the road you left into a pedestrian area. I went straight on and rejoined the route later.

So first the frustration and then the brutality, it was almost as if it was a psychological softening followed by the physical breaking down.  The first hill, defined o my route card as 8km at 2.5%, was in reality a gentle 2% for about 5km and then that purple bit of 11% for 3km.  One section on this (remember it 11% average) defeated be due to wheelslip and then failure to get traction at restart. The downhill was a sham as well.  A great descent, but then a 90-degree right hander straight into the next climb, so no chance to carry any momentum.  At least this one was a bit shallower.

The third and fourth climbs were the big ones though, the first one was on absolutely great tarmac, newly laid and smooth, on a forestry road at a nice steady angle of about 4-5% with a few occaisional kicks up and followed by a great descent.  The next climb however was much more brutal with a few bits again kicking up to 7, 9, 11% etc.  The weather was now closing in again and I simply lost both momentum and the will to live on one section, ending up walking about 2km.  The hills and the earlier messing about had thrown my discipline of hourly blood glucose testing and snacking out of the window, and during this walking period I tested to find a 3.2 which is far too low compared with my target 5-6mmol/l.  It’s possible that contributed to both my physical performance and mental performance manifesting as a serious sense of humour failure. 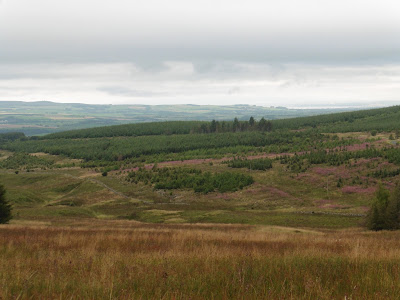 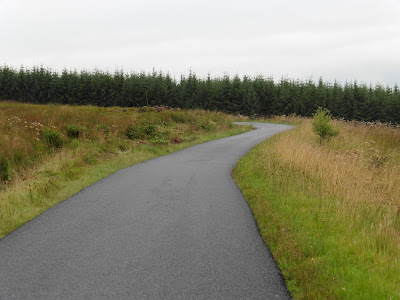 By this time, the weather was worsening as well, it should have been through earlier in the day while I was on the ferries, but seemed to have been running late, so as I got to the top of the final climb I was actually in the clouds, just me and the sheep. I didn’t even see the memorial marker to the old smugglers who used to use this route, or the spring at the top.

Still, the descent was amazing, bout 25km of downhill on good roads before getting into a rolling section into my final destination.  I forgot to say that the only mechanical issue so far was the front derailleur failing to shift into the granny ring itself, so I had decide to use it, get off and push it across manually before restarting.  Going the other way was OK, but on one occasion I managed to mangle my finger in the process. I thought I’d just caught my glove until I took it off, and found I’d sliced it in two places on the tip of the index finger.  Painful, but not life threatening.

Having managed to catch the earlier ferries, I was still way over time and ended up getting to my hotel for about 8:30pm, kitchen closed.  Quick shower and then out to the only restaurant open on a Monday evening, Indian, no problems.

“I’m very hungry, if you bring me my food altogether, starter and main course I can eat very quickly”

I was done by 9:45 having ordered at 9:15.  The waiter didn’t seem to believe what was going on before him.  Back to the hotel for a beer, which I carried up to my room and struggled to drink while falling asleep.

On analysis one of my issues today was lack of water I think.  With two hours cycling on the islands and 120km due to the route faffing on the mainland in about 8 hours of cycling time, I only drank 3.5l from my bottles and a couple of coffees and a beer on the ferries.  Not enough for those conditions.
Distance today, 50km+123km = 173km, 1800m elevation gain

And by the way, if I ever suggest following NCN 7 from Adrossan to Newton Stewart again

I’m NEVER doing that again.
Posted by The Athletic Diabetic at 19:50