The shortest distance so far at only 101km planned distance, so no time pressure whatsoesver other than getting back to my parents house where I’d left my car and where I was staying overnight before heading back home on Thursday.

This one was back loaded with the hills, but nothing too steep or prolonged this time, the major hills of the Lake District and the Yorkshire Dales being to the East and West of the route, but it’s almost impossible to avoid anything at all in that region.  One thing I did want to do though was avoid the main Tebay-Kirkby Stephen route, both a fast road with heavy traffic, but also with an almighty steep hill on it, just on the edge of town.

Another good breakfast (no idea what effect this will be having on my waistline, but I’m hopefully riding it all off each day) and a great morning to start, getting on the road just after 9 am again despite telling myself I would be happy to start around ten – I guess I just don’t do lazy in the morning.  A bit breezy with the wind being south-westerly, not quite in a helpful direction but hopefully not a hindrance either.

The nice flat start was great, and well signposted out of town, with the very odd experience of riding on a road I pointed out to my dad on the way up.  The minor road carrying NCN 7 runs next to the main North-South highway the M6, so I was riding in the opposite direction with just the concrete barrier separating me from heavy traffic at 70mph plus.

Lots of twisty lanes doing the last bit around the Solway Firth, with a car on its side in a ditch being a good reminder of why these country lanes can be so dangerous.  All good to Carlisle, which I hadn’t realised was quite so close to the border.  Good roads and surfaces to this point, and the only oddity of routing I came across on this section.  If you’re reading from outside the UK, remember we drive on the left, so to be routed off the road, through a narrow alley onto a residential street might seem a good idea for separation from traffic. Apart from the end of this dumping you at a junction where you now need to turn right across 4 lanes of traffic or negotiate a mixed use path.   Luckily the traffic was light coming up against me and I was able to filter easily into the direction I needed to go.

It was all flat to Carlisle, where the rolling hills started immediately with the route out of town on the drag up past the castle.  This is where I started departing from the planned route.  The next town was Dalston, and the Garmin sat. nav simply lost its mind on the exit, directing be about twi miles up a gradient to a small village with a green triangle where it asked me to do a 180 and head back the way I came.  At this point I decided to ignore it, and, as I was familiar with the area just follow the roadsigns for Penrith which I knew was my next major routing point.  A nice easy rolling road, with a bit of an uphill into town, but a nice descent to follow.  I managed to pick up my route again here (I thought!) to get a nice easy crossing underneath the A66, another major east-west road I’d not want to be on the carriageway of.

I live in a very rural area, and see quite a few strange things going on, but this was definitely my first stop for llamas. 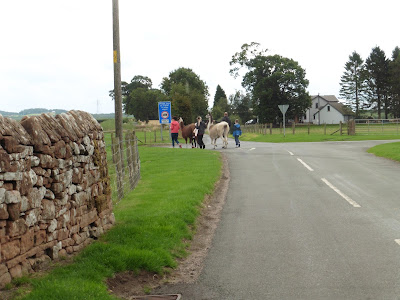 We pause for Llamas

This next section should have been a fairly easy run back into my destination through some small villages I knew the names of but not the detailed routing.  The sat nav failed me again however and I ended up in the village of Great Strickland, riding past the pub and thinking I saw “open all day” sign, I thought I’d pop in for a little isotonic refreshment and a packet of crisps for the salt.  I’d misread that sign however, open all day was Saturday and Sunday only, but the landlord was a very nice guy, let me buy a beer and packet of crisps anyway and sat chatting with me in the pub garden.

He’s recently diversified into providing accommodation for cyclists on the coast to coast ride, and holidaying families, with some very well appointed log cabins in the pub’s garden.  He told me that they used to be open all day until the local water company decided that a new sewer was needed, took 14 months to install it and the road closures just killed his business.  He had a long, hard look at the S40, it’s definitely a striking design and very conversation provoking.  I thought I was way off route by now as well (looking back at the Garmin route record, I was actually right where I should be) and asked for a bit of route advice from a local.  He basically described my back up route, which I then decided to follow.

All good so far, nice quiet rolling roads, only interrupted by frequent heavy showers and stops under trees to pull out the waterproof and then stow it again when the rain had stopped – it was too warm to keep it on all the time.  My favourite road of the day was the road out of Shap, to Orton across the fells, just me and the sheep, the occasional cattle grid being interesting on the S40.  A nice rolling road, passing back under the M6 and into the lovely town of Orton, with a chocolatier who seemed to be doing very good business, and apparently sells a lot of his production into the expensive London hotels.

Remember I said about the A685, Tebay to Kirkby Stephen route?  One wrong turn.  I was 50:50 in my mind left or right, went right following one road sign instead of another, should have followed the little bike symbol, but perhaps my Scottish experience was clouding my thoughts.  In any case after an amazing descent down a narrow lane with stone walls either side – luckily nothing coming the other way, I ended up on the dreaded A685.  I looked at the maps later on with my dad and the left hand fork was the correct route, and would have avoided nasty hills as well.  At this point I knew what was coming, Ash Fell.  The road here has a crawler lane to allow cars to pass the slower traffic on the way up.

I got up the first purple section and the red section and that was it.  Here’s the view looking down, taken on my way home from a layby at the top.  My tired legs just couldn’t take any more purple. 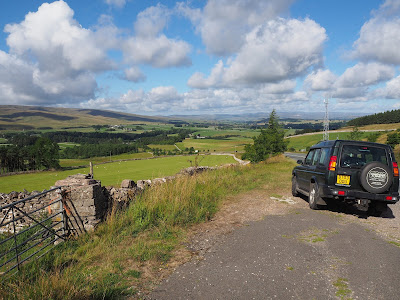 The view down Ash Fell, my landrover in the foreground 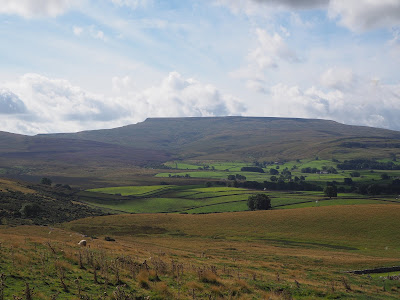 The downhill though, was spectacular, and cue how to almost wipe out on an S40 at high speed.
Start with three days hilly riding, of about 420km in total, so you are well and truly tired. Take one wrong turn 5 miles from the final destination, putting you onto a road you know you don't want to be on. Get to the 12% hill that you know you don't want to ride up (it has a crawler lane for slow vehicles), get off and push for about 1km. Remount the bike for the other side - which gets to something like a 15% downslope.

Hit something like 63km/h approaching a bend (with the brakes being feathered!) and swap your leading foot.

Cue a massive swoop to the left towards a stone wall, catch that with a massive correction to the right and finally get back to the middle of the road.

That was dammned close to my first ever CB accident and it could have been BAD. No idea what was going through the mind of the driver who had been following me down the hill.  I cruised the rest of the way into town.   Back to my parents place a good hot shower and a good evening meal out in the pub.

That was it. Done.
Total for the day 104km, so my rerouting only added a very short bit extra. Here’s what it actually looked like vs the plan https://connect.garmin.com/modern/activity/2919069944

So on reflection what did I learn? Or a better question perhaps, would I do it again?
Well I certainly wouldn’t do the same route again, where’s the fun in that? But if I were to do another tour, with luggage, either camping or another credit card tour what would I do different?

And a week later, update on the front derailleur, seems all it needed was a bit of lube on all the pivots and working in.

Overall, part of the intention of this trip in my own mind was to decide whether I think the Cruzbike is really the way forwards in terms of recumbents, for me.  Having now ridden the best part of 2,800km on it I’d say that’s a resounding yes.  I don’t think the issues I had were any more significant than I would have had on my roadbike, laden in the same way and with similar gearing, other than the few traction issues.   So it’s definitely a big thumbs up for the Cruzbike

So next year, am I going back?  I think so, with a plan developing already involving the use of my car, ferries, day rides, more islands and more distillery visits, this time with souvenirs.

For now though, it’s back to reality with my wife on holiday for a week with our daughter and me taking care of our son, whilst juggling the day job.

To whet your appetite, here’s the nascent plan in my mind so far.

Posted by The Athletic Diabetic at 20:11