Needs Must When the Devil Drives Part 3

Here’s the route profile for today, 142km with front loaded climbing and a flat tail along the Solway Firth.

Heavy rain overnight, but cleared for the morning. A very good breakfast with no rushing, but I still managed to be on the road just after 9am.

A mostly much more sensible route today, but a couple of points to note.  The very first innocuous looking blip is getting up onto an old military road (these were put in after a Scots Rebellion in the 17th Century, but backfired a bit as they simply allowed the next rebellion to come swarming out of the hills in a much more organised fashion).  In this case I knew I was going to have to walk about 300 yards as the blip up was in fact about 20% and then plateauing, but that was no problem, and then the next little blip was a right PITA, with another of these pointlessly routed off road sections onto a mixed use path through a forest with very steep access ramps through gates.  The only problem was the other side, being in a forest and having had heavy rain the previous night, the mossy floor offered no traction at all to a road tyre.  A Q45 perhaps with a knobbly, but not a 28mm Conti GP 4 Seasons. Only about 100 yd of pushing though.

The rest of the route looks pretty benign and it was. The first substantial climb being a lovely quiet road through a forest section, another logging road with a steady incline and no major dramas, and with the added bonus of an eagle taking off from a telegraph pole right on the roadside.  Not a single car for about 15km.   The downhill was great, until the point where a young deer jumped out from the hedge next to me, took half a dozen skittish strides along the road next to me and bounded back into the hedge.  A great view, but could have been a very different outcome if it had headed across my path.

The bit coming out of Kircudbright at about 50km was unexpected, but not too difficult with another steady drag of 4-5%, with a nice steady descent into Castle Douglass, where I had a nice stop for an ice cream and packet of crisps sat on a park bench in the sunshine.  Out of Castle Douglass though was a different matter, with another military road which started out nicely, but rapidly changed to a series of sharply undulating up and downs, just what I hate, too short to get enough momentum downhill before the next sharp uphill takes it out of your legs again.  The average route profile really does not show this.

The Solway firth section after Dumfries was indeed pancake flat as shown, but with one or two routing idiocies again, like turn off the minor road you are on, onto a farm track, through a campsite onto a beach road which is really not suitable for any kind of bike in comfort for about 500 yards and then route through a village back onto the road you just left.  That section and the two mentioned above would get rerouted next time.  The other bit to reroute, back in Gatehouse of Fleet was really stupid on the part of the route designer, going through a large estate with a golf course, so far so good, but then turning off road into a forest for about 2 miles, mostly unrideable on road tyres due to the damp slippery nature of the surface.  That could easily be given as an option with another on road route bypassing that section.  I think it can’t save more than a mile by cutting through the forest. 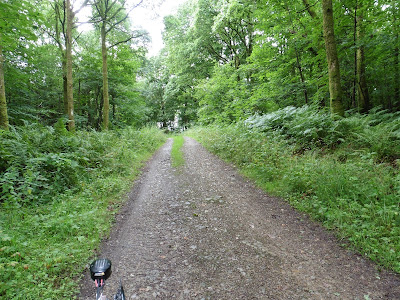 Overall a much easier day, and much more sensible discipline around my blood testing and eating saw no problems there. 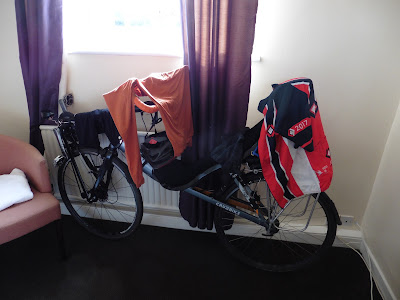 Repurposing an S40 as a clothes drier

A good dinner and couple of beers and an early night in Gretna, to be honest riding through the town on arrival didn’t make me want to hang around.  The Devils Porridge Pot Museum on the run into town and the Old Forge may be worth a visit if I have more time on another trip.  The former is an old WWI munitions factory, making explosives, the mix being referred to as the Devil’s Porridge.  The Old Forge was where young couples could elope to be married.  Gretna is a border town and the rules in Scotland were different, with no permission from parents required for younger victims.